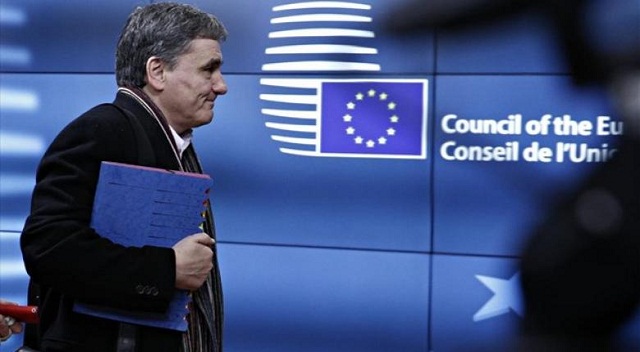 The minister said that the monitoring of Greece after the bailout is not tied to the credit line, reviews and any other bailout measures.

Tsakalotos added that Greece’s lenders are very satisfied from the growth plan he presented. On Greece’s debt, the minister said talks are continuing and will be completed at the June 21 eurogroup.

“We are very satisfied from the Eurogroup. It was highlighted that all will finish June 21, which is what we want.

There was a positive reception for Greece’s post-programme growth plan, presented by Greek Finance Minister Euclid Tsakalotos’ at the Eurogroup in Sofia on Friday, European Commissioner Pierre Moscovici also said in statements after the end of the Eurogroup.

Moscovici said that the comprehensive growth plan presented by Tsakalotos covered all the main sectors and reforms that must continue after the conclusion of the programme in August. The aim of this strategy is to boost productivity, improve the business climate and attract investments. “We had a very interesting discussion and all the ministers appreciated Euclid’s presentation,” he noted.

“We are into the final stretch for Greece’s exit from the programme,” the Commissioner added, saying that 90 percent of the distance has been covered and the effort will not ease up until it was fully completed.

Referring to the final review, Moscovici announced that the heads of the institutions will be in Athens on May 14 to work toward a staff level agreement. “We must intensify and speed up the efforts. We are making progress but we have still work to do,” he said.

On the post-programme surveillance of the Greek economy, Moscovici said that a specific framework must be decided that will build confidence in capital markets and he clarified that the mechanism in the post-programme period will not be a new programme or an extension of the existing programme.

Referring to debt relief, Moscovici noted that a strong debt relief package must be agreed but more preparation is needed.

The Commissioner reiterated that the target is to arrive at a comprehensive agreement at the Eurogroup meeting on June 21 in Luxembourg. “On August 20, the Greek programme comes to an end, which will signal the end of the financial support to Greece,” he noted and concluded: “This is a new page for Greece and for the eurozone. Together we managed to build a success story for Greece.”