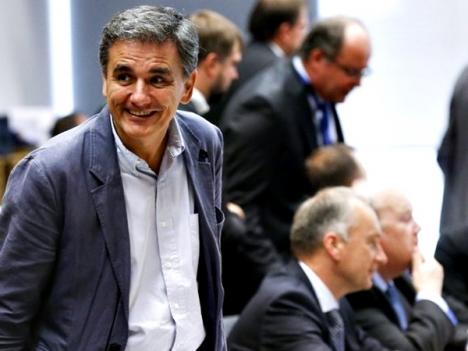 Finance Minister Euclid Tsakalotos expressed his satisfaction with the results of Monday’s Eurogroup in a press conference saying it was “positive for Greece and Europe”, following the meeting in Brussels.

The minister said there is an agreement on the fiscal measures and the structural reforms and as soon as the country concludes the legislation of the necessary prior actions there will be a disbursement of the next loan tranche from the European Stability Mechanism (ESM).

He also said the EuroWorking Group (EWG) will prepare in the next two weeks the work for the next regular Eurogroup on May 24, by which all pending issues of the deal are expected to have closed.

Concerning the contingency mechanism, Tsakalotos said finance ministers agreed that the Greek proposal is the base for the talks, adding that the EWG will work to agree on the technical points.

Asked about the debt, which is part of the overall deal, he said today there was a first discussion and “an interesting exchange of views”, noting that debt reprofiling will take place in three stages: The first on a short-term basis, which will start when the deal closes on the first program review and the loan installment is disbursed. The second, on a medium-term basis, when specific measures will be specified and implemented in 2018, on the condition that the government has completed the program successfully. The third stage will be on a long-term basis, for measures that concern the next decades.