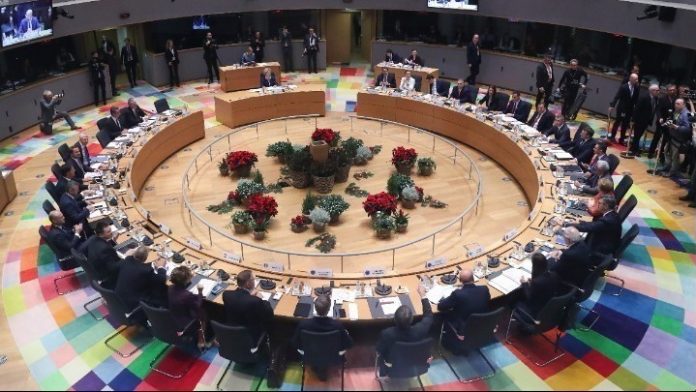 The first of a two-day meeting of the European Council concluded in Brussels on Thursday.

The Council’s full agenda includes with coronavirus developments in Europe, relations with the United Kingdom (Brexit), climate change, and relations with Africa.

At statements to the press prior to the opening of the meeting, France and Germany warned Turkey that it will need to stop its provocative actions in the East Mediterranean, and gave it a week to clarify its positions, according to a Reuters report on Thursday.

As the two-day European Council prepared to open its session, French Foreign Minister Jean-Yves Le Drian said in a joint press conference with his German and Polish counterparts that Turkey’s provocative acts are “unacceptable”.

Reflecting the same stance, German FM Heiko Maas said that dispatching the “Oruc Reis” research ship back to the East Mediterranean was “inadmissible”, Reuters said, adding that in terms of what it would do, the EU would decide how to react in the coming weeks.

As government spokesman Stelios Petsas said in Athens earlier in the day, “Twice now in a short space of time, Ankara has reneged on its commitments. During his recent brief meeting with his Greek counterpart, the Turkish foreign minister had promised to propose a date for the 61st round of exploratory talks to be held in Turkey. But instead of an invitation, we had a provocation and, in fact, a double one.

“[This is] a fact that proves Turkey’s unreliability but also its contempt for the conclusions of the European Union summit on October 1-2,” he added, reiterating the premier’s position that there can be no exploratory talks between Greece and Turkey as long as the Oruc Reis remains within the Greek continental shelf.

European Parliament President David Sassoli referred to Turkey’s aggressive behavior in the East Mediterranean, during his address to the opening session of the European Council on Thursday.

At statements to the press after his address, Sassoli said he had referred to the issue of Turkey continuing its provocations and said that the research vessel “Oruc Reis” is currently in the same location it was back in August. In terms of Turkey’s reopening the Varosha coastal strip on Cyprus, he said it had “acted unilaterally”.