The government will take legislative initiatives in September in order to increase the minimum wage and face unemployment, State Minister Christophoros Vernadakis said on Tuesday in an interview with the Athens-Macedonian News Agency’s (ANA) radio station Praktoreio 104.9 FM.

Vernadakis underlined that the exit from the memorandum entails the restructuring of Greece’s productive reconstruction without the constraints of loan contracts.

He also revealed that the government is considering targeted and very important tax reliefs. 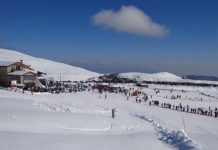