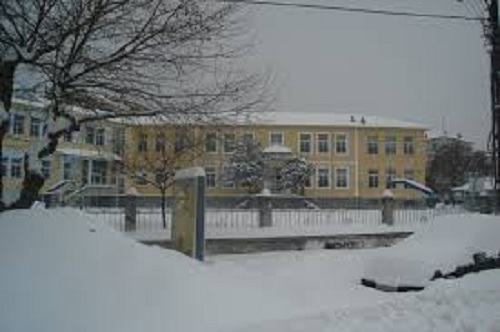 A cold front bringing snow and heavy rain that has swept across northern and central Greece since Sunday, reaching as far south as Lamia, left many areas covered in snow on Monday morning and led to flight cancellations and delays at Macedonia Airport in Thessaloniki, while many schools stayed closed.

Six flights to Thessaloniki – four from Athens, a Cobalt flight from Larnaca and a Transavia flight from Amsterdam – were cancelled on Monday morning, Fraport Greece Public Relations Manager Yiannis Papazoglou told the Athens-Macedonian News Agency (ANA). He said the problems were caused by low cloud since the airport was fully equipped to deal with snow and icy conditions.

Passengers are advised to check the airport website www.skg-airport.gr for possible further changes in the flights schedule or to contact their airline. According to the Central Macedonia weather service, the current conditions are likely to persist, with a further drop in temperatures.

The deep snow cover has also caused problems on the road network, especially in the northern Greek regions of Central Macedonia and Western Macedonia. The municipality of Edessa warned the public to beware and report tree branches at risk of breaking due to the weight of the snow, while municipal crews throughout northern Greece are battling to keep roads open.

Schools in many areas of northern and central Greece stayed closed due to the bad weather.

Areas of Central Greece with an altitude above 200 metres also woke on Monday to find that snow had settled overnight, while elsewhere the region experienced heavy rain with authorities concerned about possible flooding of rivers, such as the Sperchios and Pinios.

Cars travelling in the Domokos area on the road to Karditsa and Trikala were required to have snow chains. Snow chains were also essential on the Lamia-Karpenissi road, with heavy snow in Karpenissi and snowfall throughout Evritania.

Talking to the ANA, the head of the civil protection sector of the Central Macedonia Region Haralambos Stergiadis said the snowfall was severe and was forecast to continue for several hours, while temperatures were expected to drop sharply on Thursday, with a risk of ice forming.

There was also light snowfall in the centre of Thessaloniki, which led to serious traffic congestion in the city.