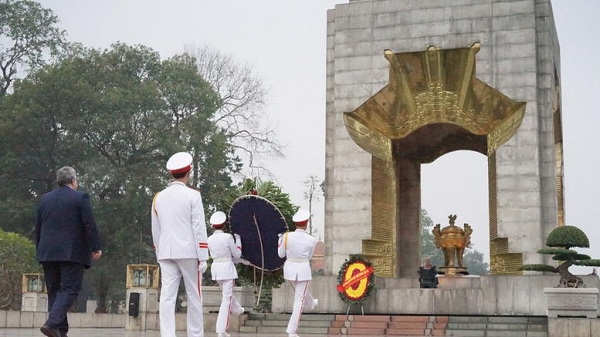 Foreign Minister Nikos Kotzias, currently on a visit to Vietnam, left the national capital Hanoi on Tuesday for Ho Chi Minh City, the more populous industrial centre of the country. On his arrival, Kotzias and the Greek delegation met the chairman of the city’s People’s Committee Nguyen Thanh Phong.

During the meeting, Kotzias referred to his talks with government officials in Hanoi and his plans to try to organise a Greek-Vietnamese business forum as part of an effort to further develop bilateral cooperation in shipping and other economic affairs. He said that Greece wished to act as Vietnam’s gateway to the EU through cooperation in the transport sector and also make use of the business opportunities offered by Vietnam. He highlighted the potential for cooperation and the knowhow Greece can offer in areas such as construction, tourism, culture and maritime transport, especially through cooperation between ports in the two countries.

Ho Chi Minh City is Vietnam’s economic “powerhouse” and generates a quarter of the country’s GDP, while businesses from more than 85 countries have invested there. There are currently 250,000 firms operating in the city and the government’s aim is to double this number by 2020. The minister will depart for Athens on Wednesday, following a visit to the city’s techology park and war museum.

Earlier, before departing from Hanoi, Kotzias laid a wreath at a monument erected in honour of the casualties of Vietnam’s war of independence and then laid a wreath at the Ho Chi Minh Mausoleum.

Writing in the visitors’ book, Kotzias said that the visit realised “the dream of a lifetime for me, to pay homage to a historic leader, Ho Chi Minh, who led his nation’s struggle to defend its dignity and to preserve its national unity and sovereignty. A leader who was an inspiration for us.”

The minister also visited the home of Vietnamese general Võ Nguyên Giáp, who led Vietnam’s forces in their successful campaign against the French in 1954, and spoke with his son.