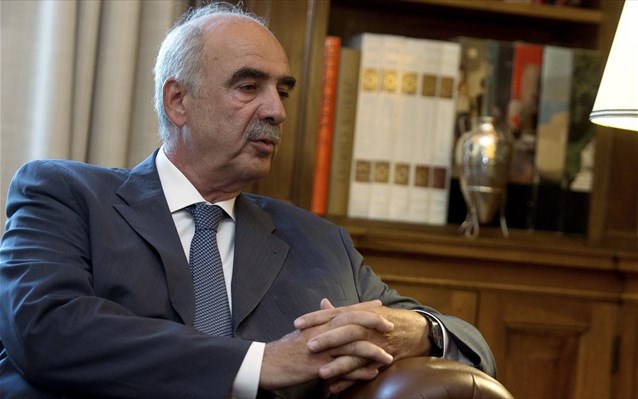 Main opposition New Democracy MP Vangelis Meimarakis, a high-ranking ND cadre who had served as Parliament President and also interim party leader before losing in the internal elections to Kyriakos Mitsotakis, on Thursday “broke ranks” and criticised the leadership’s hardline stance on the new package of measures coming to Parliament.

Talking to the reporters covering Parliament, who asked him to comment on ND’s refusal to vote in favour of the package of measures, Meimarakis said that not voting for the measures or even walking out of the vote as some proposed, was “acting tough from a position of safety”.

Unlike the decision to vote in favour of the 3rd memorandum in the summer of 2015, when ND had supported the proposal in Parliament, the government’s majority was now secure and there was no chance that the vote would not be carried or jeopardise the country’s position in the Eurozone, Meimarakis said.

“Today the conditions are entirely different. Then Tsipras did not have the majority. He had lost a lot of MPs. Now, however, you act tough from a position of safety and say you will not vote for [the measures]. But what if you had 145 MPs? What if the country might have dropped out of the euro? What would you do then,” he said.

Meimarakis also pointed out that ND’s stance in 2015 was decided unanimously, with ND Vice-President Kostis Hatzidakis as rapporteur and Kyriakos Mitsotakis as Parliamentary spokesman.

At the same time, Meimarakis criticised Prime Minister Alexis Tsipras for failing to take the initiatives needed to cultivate the conditions for a political understanding. Referring to the period when he was Parliament president, Meimarakis said he had made efforts in that direction, contacting the then prime minister Antonis Samaras.

“We do not have a period of prosperity, wealth and glamour but a period of crisis, poverty and misery. Should we not strive for a national understanding? After Papandreou toppled Karamanlis and Samaras toppled Papademos and Tsipras toppled Samaras and so forth, what happens now? Do you believe that Tsipras’ policy is any different from Samaras’ policy, or Mitsotakis’ policy if he comes? I would say, therefore, “let’s go together, so the foreigners also know that this is it, so that the people understand that some of us can reach an understanding.”

He repeated his position in favour of a “national team” for the negotiations and pointed out that this was done in many of the crisis that successfully emerged from the crisis, when the lenders were trying to impose measures going beyond 2020.