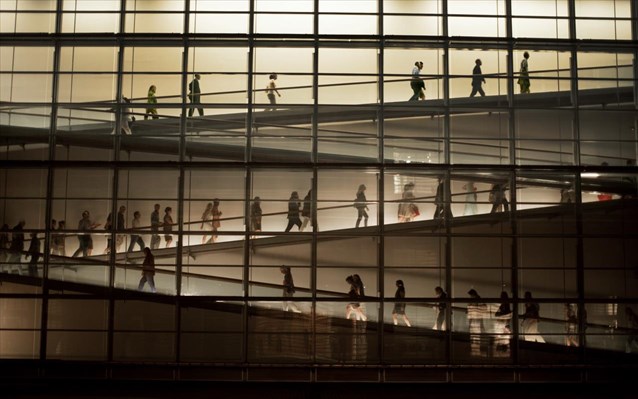 Four masterpieces, two from the Shanghai Museum and two from the Acropolis Museum, are to ‘travel’ to Greece and China, respectively, for display as temporary exhibits in the two museums.

The two unique antiquities loaned by the Acropolis Museum are a marble statue of a Kore (520-510 BC) and a red-figure lekanida lid with a Dionysian scene (350-325 BC), which will be presented at the Shanghai Museum from January 11 to April 8, 2018.

The Kore with the number 670 – one of the most beautiful and well preserved sculptures of the Acropolis, which retains traces of its archaic colours – was exhibited in Russia’s Hermitage Museum for the launch of events in the Year of Greece-Russia 2016.

At the same time, two outstanding objects from the Chinese Museum will be exhibited at the Acropolis Museum. The first one is a painting on paper by Wu Hong, painter of the Qing Dynasty (7th century).
The composition is entitled “Traveling along the Clear Water” and its creator, on whom there is little information, is considered a great painter.

The second exhibit from the Shanghai Museum is a Zi Zhong Jiang pan, or bronze wash basin, inside of which there are figures of aquatic birds, frogs, turtles and fish. It dates back to the 7th century B.C. (Early Chunqiu Shidai Period or Spring and Autumn Period) and was made for Princess Zi Zhong Jiang. It is considered one of the most important exhibits of the museum. The exhibition of Chinese objects will last from October 28, 2017 to April 30, 2018.

The Central Archaeological Council on Wednesday approved the temporary loan of the exhibits, which will be presented within the framework of the five-year memorandum of cooperation between the Acropolis Museum and the Shanghai Museum and the 2017 Greece – China Year of Cultural Exchanges and Cooperation.