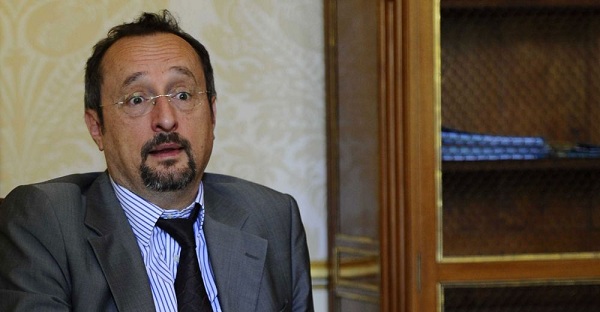 In a hopeful note about the future prospects of the Greek economy, French Ambassador in Athens Christophe Chantepy on Thursday highlighted optimistic forecasts that economic recovery was around the corner, in statements to the Athens-Macedonian News Agency (ANA).

“Everyone sees that Greece is recovering. The government is implementing the prior actions under the third programme and the forecasts for Greece’s recovery are especially good, with a growth rate of 2.7 pct in 2017 and 3.1 pct in 2018,” he said. Chantepy was speaking on the sidelines of a forum on environment, energy, business and innovation organised by the French-Hellenic Chamber of Industry and Commerce at the French Institute of Greece.
Greece’s fiscal targets will be achieved and lead to a “satisfactory” fiscal framework, Chantepy added.

“France has always supported Greece, from the start of the crisis, and especially in the summer of 2015, which was very crucial for the country,” the ambassador noted, adding that French President Francois Hollande and French Prime Minister Manuel Valls had repeatedly expressed their support.

Chantepy also referred to relations between Greece and France and the need to develop closer cooperation in energy and innovation.

“France already invests signifcantly in Greece. More than 100 French firms are active in the country already and France is the second largest investor in Greece. We want this growth, since …the environment and energy are sectors where there is huge growth potential, both for Greece and for France but also the rest of the world, as part of the creation of the new ecosystem that is arising as a result of the protection of the environment,” he said.

The ambassador noted that the environment offered great opportunities for citizens and the economy to create new jobs, something that both Greece and France needed greatly.

Regarding the “innovation ecosystem” in Greece, the French ambassador said that this was among the best in Europe, even though few people were aware of this. “It is exceptionally important to develop relations between our countries in this field, since France puts emphasis on innovation, as does Greece,” he added.

“We will try to get more than 80 representatives of the French innovation ecosystem in touch with their Greek equivalents, hoping to trigger a ‘big bang’ in the near future,” Chantepy said.

On the future of the EU as a whole, the ambassador said there was every reason to be optimistic and again highlighted the young people, especially in France and Greece, involved in innovation, who should be helped to develop their ideas and projects.

“Year by year, Greece will recover and find a new path to growth, greatly reducing unemployment rates,” he noted, while also pointing to the many opportunities for investment available for French businesses.

In opening remarks to the forum, Greece’s Environment and Energy Minister George Stathakis said that Greece’s goal was to attract investment plans with a positive environmental footprint. He underlined the Greek government’s commitment to the Paris Agreement on climate change and its intention to undertake joint initiatives with France toward this goal.

Other joint actions now in the planning stage concerned water and waste management, Stathakis added, while the two sides were also promoting technical cooperation in the protection of coastal areas, forest management and the protection of national parks and protected areas.

Stathakis said the two countries were additionally working together on the production and transport of energy, with joint investment and business projects now maturing for the creation, extension and modernisation of energy networks, especially “smart networks” technology.