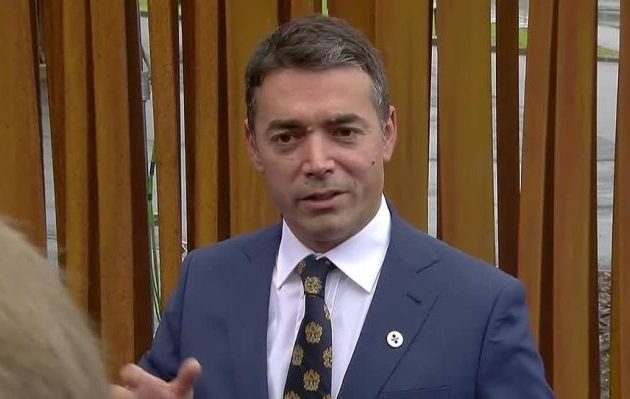 Skopje will do what it can to resolve the issue of the country’s name with Greece, Former Yugoslav Republic of Macedonia (FYROM) Foreign Minister Nikola Dimitrov told Athens-Macedonian News Agency (ANA-MPA) after the conclusion of the two-day Second Ministerial Meeting of Greece, Albania, Bulgaria and FYROM in Thessaloniki on Thursday.

The meeting included foreign ministers from the four states, as well as officials from their respective energy ministries. Greece, whose initiative this is, was represented by Foreign Minister Nikos Kotzias.
Responding to a question on whether he can see a near-future resolution of the issue, Dimitrov said,

“Today I want to stay on ‘the larger picture’. In order to resolve the issue of the name – and we will naturally do the best we can to resolve it – it’s important to create a positive framework and climb out of the grooves of history, since we cannot change our history, but we can influence our future, and this future will be both common and European. It is important to invest in this direction. If there is a national interest common to all countries, including ours, it is how to do the best for our citizens’ future. We are on the right path.”

In earlier comments to the press on the quadrilateral meetings in Thessaloniki, the foreign minister described them as “a very interesting initiative” and “a process from which we are learning how to be closer friends and future allies.”

He added that “the atmosphere encouraged me. I believe that we are growing up and maturing as an area. There is still a lot to be done, but we are on the right path.”

In his meeting with Kotzias, he said, “we accepted that there is an issue of the name that divides the two countries (…) and in order to assist in the resolution of this issue, we focused on those areas in which we could achieve progress, and this, in turn, will contribute to resolving the issue that divides us.”

Among other things, Dimitrov said, the meeting also focused on “how we may promote and strengthen the positive agenda between the two countries” and included cooperation at the level of civil society (NGOs), the strengthening of cooperation between universities of the two countries, and the organising a business forum.