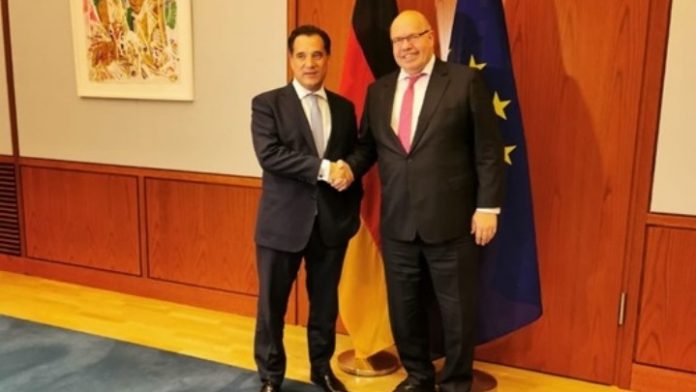 A “good first step” towards establishing a fresh business environment in Greece, is how Investments and Development Minister Adonis Georgiadis described his two-day visit in Berlin.

Georgiadis’ meeting with Federal Minister for Economic Affairs and Energy Peter Altmaier lasted twice the scheduled time, during which the German FinMin praised the efforts of Kyriakos Mitsotakis’ government and expressed his liking to the Greek government’s first steps and reforms, according to Georgiadis.

On the issue of the Turkey-Libya MoU on maritime zones, Altmaier expressed the full support of his government for Greece’s stance on the matter.

The meeting focused on the Hellenic-German Economic Forum, to be held in Berlin on March 9, 2020, the organization of which is the shared responsibility of Georgiadis’ and Altmaier’s ministries. The Forum will be addressed by Kyriakos Mitsotakis and Angela Merkel and includes panels on energy, entrepreneurialism and economy.

The two ministers also discussed the course of large German companies already active in Greece, such as Fraport and Deutsche Telekom.

“These companies can be a paradigm for more German investments and the participation of German companies in Greece’s privatization program,” Georgiades said, and he stressed that as far as his government is concerned, the “bet” is for Greece to improve its investment-related indicators.