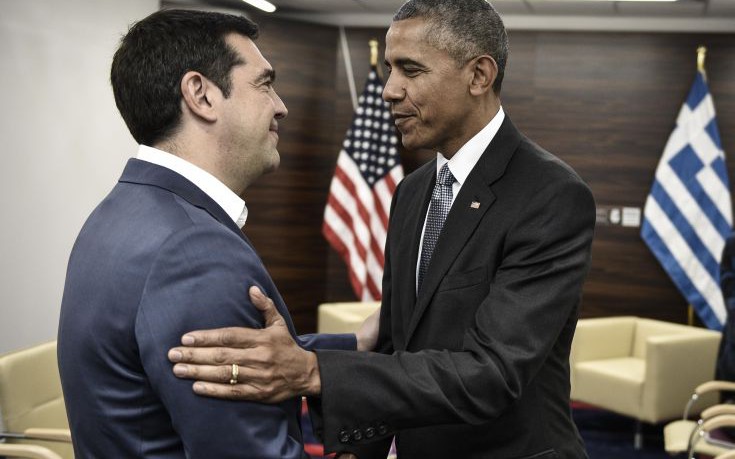 Prime Minister Alexis Tsipras’ meeting with the U.S. President Barack Obama in Warsaw on Saturday on the sidelines of the NATO Summit meeting concludes a series of high-lever meetings with world leaders such as Russian President Vladimir Putin and Chinese Premier Xi Jinping, government sources said on Sunday.

These meetings show Greece’s upgraded international role as well as its emergence as a pillar of stability in the wider region, the sources said, adding that the prime minister’s visits to Turkey, Egypt, Israel, Palestine and Iran are part of the same policy.

The relations of friendship and cooperation built by Greece with a series of countries contribute to the creation of a pillar of peace and stability, particularly necessary at a time of intensification of regional tensions and conflicts. The prime minister likens Greece with “a tree that has its roots in the West, but spreads its branches towards the East, South and North”.

The same sources said the country’s upgraded regional role is explicitly recognized in the joint statements that followed the official meetings with Russian and Chinese leaders. On his side, Obama emphasized the country’s role and noted he is fully informed about the upgraded relations with Russia and China.

The meeting between PM Tsipras and Presidet Obama took place on the sidelines of the summit, where they discussed the progress that Greece has seen in regards to economic reforms and challenges.

On Friday Tsipras attended a dinner for the leaders of the 28 NATO member-states where he stated that he welcomes the recent decision to restart with the NATO-Russia Council after almost two years of freezing talks.

Tsipras also stressed the importance of the NATO alliance to enter constructive talks with Russia.