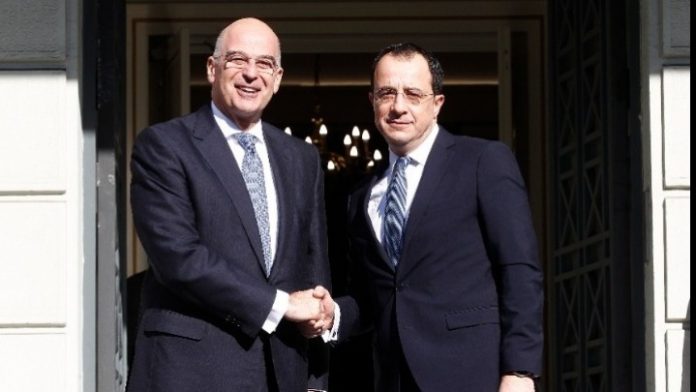 The foreign ministries of Greece and Cyprus on Monday signed a Memorandum of Understanding on Political Consultations and Technical Cooperation during a meeting between Foreign Minister Nikos Dendias and his Cypriot counterpart Nikos Christodoulides.

During the meeting, the ministers agreed that Greece and Cyprus will strive to be fully aligned and “in step”, with better coordinated and targeted actions on all levels.

In joint statements after the signing of the MoU, Dendias sent a message to Turkey and said the Turkish side must finally understand that its behaviour is counterproductive, even for itself, while exposing it to international disapproval and leading it toward progressive isolation.

He said that Greece wants Turkey to be thriving and able to accede to the European political and democratic acquis. It was encouraging that Turkey recently signalled its continued commitment to European Union accession, he added, but noted that its actions served to contradict what it asserted in writing.

Dendias said that Turkey’s illegal and provocative actions in the Eastern Mediterranean, which were no longer restricted to the Aegean and Cyprus’ maritime zones but now extended to Iraq and Libya, were discussed at length during the meeting with Christodoulides.

Turkey’s protestations of “actions of self-defence” and claims of “conspiracies plotting to exclude Turkey from the maritime milieu and energy developments” convinced no one and did not make its illegal actions legitimate, Dendias added.

He repeated that the memorandums signed by Turkey and the Tripoli government blatantly violate international law, are void and invalid and do not generate any legal effect: “They are not only attempting to usurp the sovereign rights of third countries in the Mediterranean but also act in destabilising way, both for Libya and for the wider region. They undermine peace and security in the Eastern Mediterranean.”

He noted that his upcoming contacts in Morocco, Algeria and Tunisia will seek recognition that the two memorandums were void and invalid.

Talking about the MoU signed in Athens on Monday, he said the two sides expected that it would help strengthen their ability to act in concert on a bilateral, regional and European level.

Dendias repeated that “our initiatives are not directed against anyone,” and added that all countries are welcome to join them, “with the self-evident condition that they act in the framework of international law and choose cooperation and stability instead of tension and instability.”

He also repeated that Greece states and remains ready to work toward finding a just and viable solution, in the framework of international legality and the decision of the UN Security Council.
Lastly, he announced that a telephone call with his Iranian counterpart will most likely take place on Tuesday morning.

Christodoulides said there was a very useful exchange of views with his Greek counterpart so that “the next moves of the two countries will be more coordinated, more targeted and more effective” in the midst of strong challenges of uncertainty, instability and the disputing of traditional and well established values and principles of the international system.

Concerning a possible ceasefire in Libya, the Cypriot minister said that this would be a development in the right direction. He said that Turkey’s involvement in this effort was anticipated, since it was one of the parties that was responsible for the current situation in Libya. He also expressed hope for a good outcome and said the EU should strive for a more active role in developments in Libya.

On the Cyprus issue, Christodoulides said that Nicosia’s only goal was the resumption of talks from where they left off in Crans Montana, with the hope that there will be a response from the Turkish side “so that we are led to an agreed solution on the basis of a bizonal, bicommunal federation.”

Referring to the future of the EU, he said that Europe was at a crucial crossroads and that the decisions made on important regional challenges will determine both its future and credibility. He said that Greece and Cyprus have a clearcut approach and are ready to play their part so that the EU can meet the present challenges and be a stabilising factor in the current, unpredictable international scene, he added. 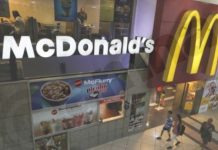