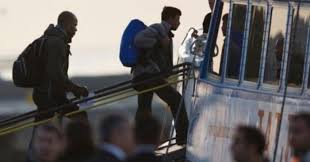 Greece completed the first 202 readmissions of refugees and migrants from Lesvos and Chios to Turkey with Frontex’s assistance on Monday, as part of the EU-Turkey agreement, it was announced.

The operation, which included 180 escort officers deployed by Frontex, as well as Greek officers, is coordinated between the Greek and Turkish authorities.

According to information provided by the Greek authorities, 136 people boarded from Lesvos – 135 and one woman – of the following nationalities: 124 Pakistanis, 3 Bangladeshis, one Iraqi, 2 Indians, 4 Sri Lankans and 2 Syrians. Another 66 people boarded in Chios – 56 men and 10 women: 42 Afghanis, 10 Iranians, 6 Pakistanis, one Indian, one Somali, one from the Ivory Coast and 5 from Congo.

None of the migrants and refugees who were readmitted applied for an asylum in Greece, including the two Syrians who asked to return to Turkey. The readmission operation will continue in the coming days.