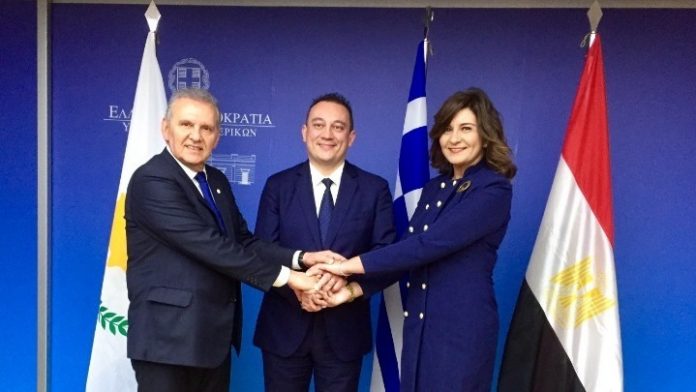 High-level officials of Greece, Cyprus and Egypt met in Athens on Thursday to discuss how to bring closer the diaspora of the three countries and promote cultural understanding.

At a press conference at the Ministry of Foreign Affairs, Greece was represented by Deputy Minister of Foreign Affairs Konstantinos Vlassis, Cyprus by its presidential commissioner for human rights and for overseas Cypriots Fotis Fotiou, and Egypt by Minister for Expatriates’ Affairs Nabila Makram

Speaking to the press, all three spoke of Greece, Cyprus and Egypt providing stability in a turbulent region, through collaborations such as these.

The three representatives also focused on youth and culture issues and agreed to continue the “Nostos” program, which takes place in different countries every year and brings together diaspora youth. The fourth Nostos will take place in Canada from end-September to early October.

Makram referred to the Global Youth Forum, held in Egypt this year, which included Greek and Cypriot youth participants, and noted the role of Nostos in strengthening ties among the three countries.

The press conference was also attended by former Foreign Affairs Yiannis Amanatidis, representing the Parliament’s Special Permanent Committee on Greeks Abroad. “The expansion of such ties helps in further promoting issues that are of high interest to us in the wider region, just as the collaboration among diasporas is reflected in the collaboration of the same peoples directly, in an unstable region that shows a growing need for such collaboration,” he said to Athens-Macedonian News Agency.