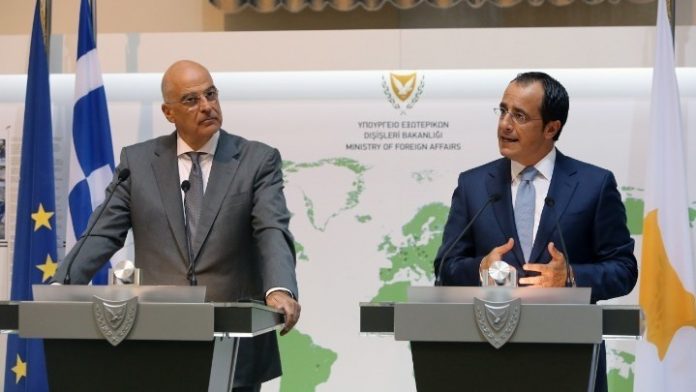 Greek Foreign Affairs Minister Nikos Dendias and his Cyprus counterpart Nikos Christodoulides spoke on Tuesday of the close cooperation of the two countries to lay the foundation for a greater collaboration in the region, bringing security and stability to it.

At a joint press conference in Nicosia following expanded contacts between delegations, Dendias said they “discussed bilateral relations and our collaboration in the framework of a joint point of view we maintain and cultivate with countries of the area who share the same values and points of view as us. It is common knowledge that these collaborations contribute to maintaining peace and stability in our region.”

Speaking of Turkish provocative behavior in the region, the Greek FM said its escalation “runs against the EU and should result in an escalation of the European reaction.” He said this would be discussed at leadership level by Greek Prime Minister Kyriakos Mitsotakis and Cyprus President Nicos Anastasiades at the MED7 Summit in Corsica and the extraordinary European Council Summit.

The aggressive behavior, Dendias noted, “shows disdain at clear stances by the EU, the US and the countries of our region,” and he mentioned specifically the illegal Turkish activity within the Cyprus exclusive economic zone and the Greek continental shelf. An insistence on illegal behavior does not create faits accomplis, he said, adding that Greece itself “has always been a proponent of dialog.”

Cyprus’ Christodoulides spoke of the daily communication between the two foreign ministries, and the commitment of both towards creating conditions of security and stability in the area.

The initiatives both countries have undertaken look towards establishing the foundation for collaborations in the area without a priori exclusions, in order to turn the region into a model of collaboration between countries, he noted. “We believe in and are truly working in this direction,” Christodoulides underlined, “since it is the only prospect that serves the interests of all countries long term.”

He also said that despite the negative developments in the area because of the behavior of one country, and despite the volatile international conditions, diplomacy does not recognize unresolvable issues. “Even if it is not obvious right now, this is temporary and what is needed is decisiveness, patience, persistence and very clear goals. If there is true commitment and will by all sides, dialog can bring results,” he said, citing as examples Cyprus’ agreements with Israel, Egypt and Lebanon on maritime boundaries, based on International Law and the Law of the Sea, which it is prepared to work towards with the rest of its neighboring countries.