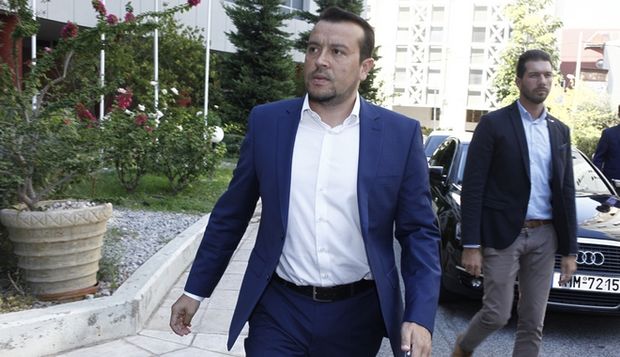 The government is implementing a multidimensional foreign policy, Digital Policy, Telecommunications and Media Minister Nikos Pappas said in an interview on Saturday, when asked how a leftist government can have relations with the president of the United States.

Replying to the state television channel ERT1 about the talks between Greek Prime Minister Alexis Tsipras and US President Donald Trump, Pappas noted that the US president seemed to know a great deal about Greece.

“Each side strives for a mutually beneficial agreement, something that political forces here tend to forget,” the minister noted. He added that, investments apart, Greece had also gained in terms of making a good impression, pointing out that “impressions generate tangible results”.

Greece was now acknowledged as an actor in the region, which was not the case in 2015, he said.
Regarding the agreement to upgrade the country’s fleet of F-16 fighter planes and Trump’s statement that this would cost 2.4 billion dollars, Pappas said that this amount would be spread over time so as not to create fiscal problems. He also pointed out that all the parties agreed that an upgrade was essential.

He dismissed criticism that the Greek premier’s trip to the US was a “surrender” of his leftist values as “laughable” and said it was time to “get away from the bipolarity of the Cold War”.

Pappas also commented on Tsipras’ comments about Turkey at the EU summit, the Souda base on Crete, the International Monetary Fund (IMF) and reactions to the US trip from the opposition parties in Greece.

He stressed that the issue for the government was not whether the IMF would stay or go but a swift completion of the agreements made without delays and the conclusion of the programme. He noted that only secondary issues remained to be discussed when the institutions’ missions arrived in Athens on Monday, referring to a “atmosphere of terror being cultivated by the media”.

“As a government, we must multiply the Greek economy’s resilience so that the country makes a dynamic entry into 2018,” he said and noted that the government was in talks with the institutions about redistributing the primary surplus to the weaker social strata, sharing it among the people in need.

Regarding his own portfolio, Pappas said that a tender for national television licences will soon be announced by the National Council for Radio and Television and that a draft bill for a Greek space agency will soon be tabled in Parliament.