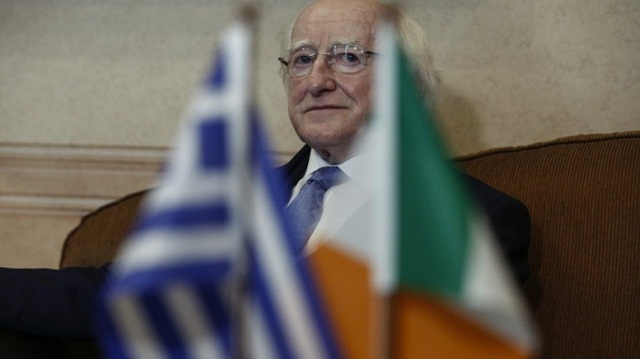 Irish President Michael Higgins on Friday underlined the significance of creativity in economic development and the state’s contribution to the development of business activity.

Addressing an event organised by Enterprise Greece, Ireland’s Embassy in Athens and the Irish Food Board, titled “Greek & Irish Connections”, the visiting Irish President noted that a priority for the state was to create conditions that will allow business creativity to flourish. He added that he has heard with satisfaction that the country was on a growth course and moving towards exiting the adjustment programme, while he underlined that a new chapter in bilateral relations could start now, with stronger business cooperation, particularly in the technology sector.

President Higgins said his visit was a testament of his strong conviction over Greece’s positive course in the future and he underlined that the two countries still have a lot to offer to the EU with their culture.

Greek Economy and Development Minister Dimitri Papadimitriou, addressing the event, said that the Irish President’s presence in Greece has an additional symbolic character: the rapprochement of two economies with strong historical and cultural bonds. He noted that Ireland was a model for Greece’s course toward exiting the adjustment programmes. “Undoubtedly, Ireland is a significant political and economic partner for Greece and our bilateral relations have the ability to develop further and in various sectors of mutual interest,” the Greek minister said, adding that now that Greece was stabilising its economy and confidence was returning to the country’s growth outlook, a new chapter opened for bilateral relations with Ireland. Papadimitriou noted that there was significant potential to attract Irish investments in Greece, particularly in real estate, along with bilateral business partnerships in small- and medium-sized enterprises, startups, new technology, shipping, financial services, infrastructure, tourism, health, transport and machinery equipment.

He noted that bilateral trade fell by 26 pct between 2010 and 2014 to 334 million euros, reflecting an 8.0 pct decline in average annual Greek imports and a 4.0 pct average increase in exports. Ireland’s direct investments in Greece accounted for only 1.0 pct of total foreign direct investments in the country.