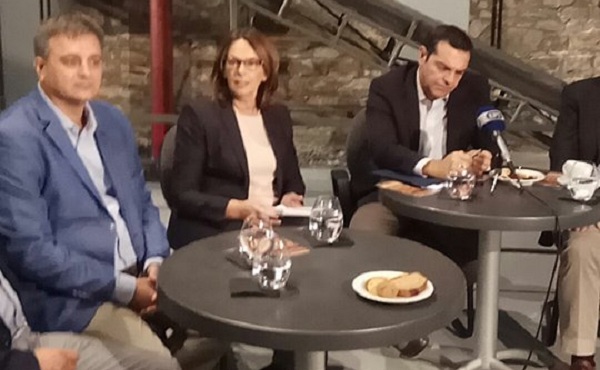 “The country needs a new production model with investments in research and technology,” Prime Minister Alexis Tsipras said on Wednesday, during a meeting with owners of new startups in the coastal city of Volos.

During the meeting, which held at a restored former factory that is now the Rooftile and Brick Works Museum N. & S. Tsalapatas in Volos, Tsipras noted that the business people at the meeting represented the “other Greece of industry and innovation.”

The prime minister greeted each of them individually, one at a time, asking their names and what they do and talked to each of them briefly. With Deputy Finance Minister Katerina Papanatsiou and Secretary General for Strategic and Private Investments Lois Lambrianidis, he listened to what they had to say and was given an in-depth briefing on their activities, results, the problems that they face and the support they would like from the government.

At 18:00 on Wednesday, Tsipras will have a meeting in Larissa with the ministers participating in the 4th Regional Conference for the Reconstruction of Production, Thessaly’s regional government and Larissa’s mayor.

The majority of the businesses participating in the meeting are dynamic exporters and many absorb graduates of Thessaly university, with which they have set up educational, research and production links.

Among their numbers is the AgTech company Centaur, which started up in 2014, offering high-tech solutions for monitoring crops. The company managed to attract investments of 1.3 million dollars from an Israeli-US-Greek consortium in 2016 and set up a U.S. subsidiary called Centaur Analytics.

Others in the group included the high-tech metal sheeting and components manufacturing firm owned by the Lazarou brothers, the agricultural automatic precision systems fir Agile Agriculture Technologies, steel and structural detail engineers SDNEG that provide 3D construction models, the detergents and cosmetics manufacturer Nilo, which recently won an innovation award, the aromatic and pharmaceutical herbs and essential oils manufacturer Terra Ferea and others.