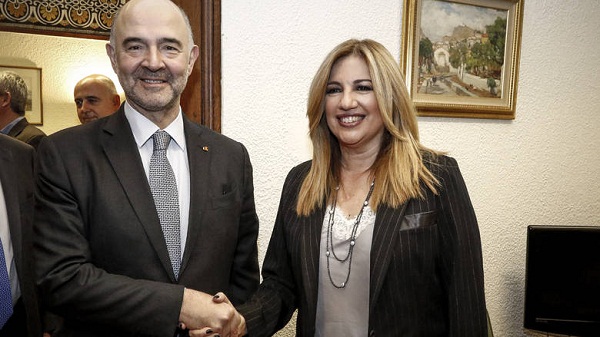 Movement for Change leader Fofi Gennimata met on Thursday with visiting European Commissioner for Economic and Financial Affairs Pierre Moscovici at her office in the Greek parliament.

After the meeting, Gennimata stated that the discussion was very constructive and focused on the conclusion of the programme, while expressing her personal concerns and doubts about whether the programme’s conclusion also means a final and safe exit from the crisis.

“I asked for his support in three targets that Greece should set immediately. That of debt relief, which means lower primary surplus targets, a growth plan that calls for attracting investments and social justice. A national plan has to be in position not only to stabilise the situation but to finally leave behind the impasses,” underlined Gennimata.

On his part, Moscovici stated that the conclusion of the programme is not the end of the game, noting that “you will not have a troika but this does not mean that there will be no commitments,” and that this had been the case in Cyprus, Ireland and Portugal as well.