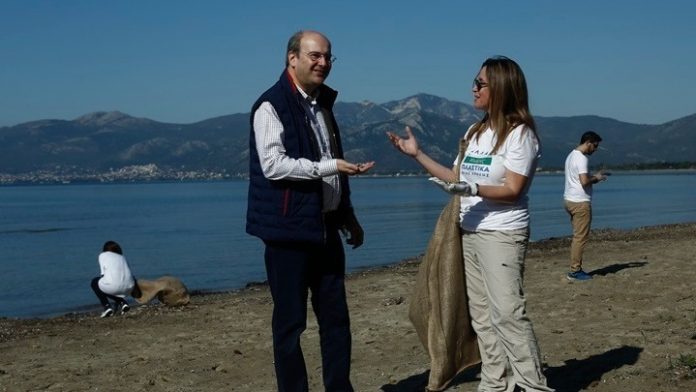 Greece will introduce an end to disposable plastics as of July 1, 2021, Environment & Energy Minister Kostis Hatzidakis said on Saturday at Schinias beach NE of Athens, where he inaugurated a joint partnership with the AC Laskaridis Charitable Foundation on the “Greece, Free of Single-Use Plastics” campaign.

At the event, where volunteers cleaned the beach from plastics, Hatzidakis said that the end to single-use plastics will be introduced to the public administration sector six months before it goes public, on January 1, he said, to allow businesses and the public ample time to adjust. He also announced that consumers will be provided with more incentives to encourage recycling of plastic single-use bottles, including a refund.

At Schinias, the longest sandy beach in Attica, Hatzidakis said that Greece will incorporate a related EU directive in a draft bill within June.

“Every day, we use a million plastic cups of coffee in Greece,” he noted, correlating it to the overwhelming majority of garbage found in the sea – up to 85 pct of which is plastics, with 50 pct of these being single-use plastics, he said. “This cannot continue, so we are moving ahead with this initiative, which the prime minister himself has strongly supported, and which must be done in tandem with citizens,” the minister stressed.

Foundation Executive Direction Angeliki Kosmopoulou, coordinating the beach clean-up, said that “Greece is taking a great leap forward” in legislating the end of disposable plastics, but added that it should be accompaned by a public awareness campaign as well.

The plastics collected at Schinias will be recorded by the Foundation.