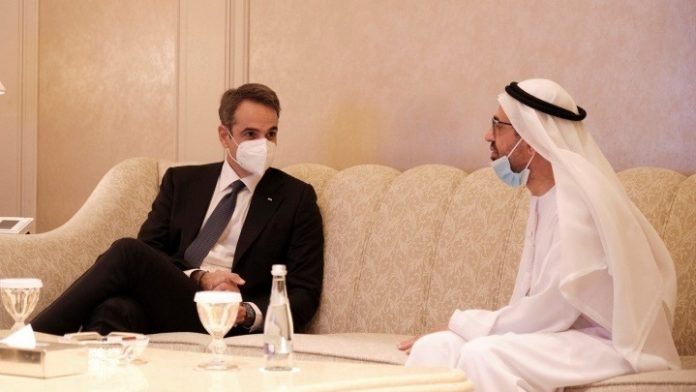 His Highness Sheikh Mohammed bin Zayed Al Nahyan, Crown Prince of Abu Dhabi and Deputy Supreme Commander of the UAE Armed Forces received His Excellency Kyriakos Mitsotakis, Prime Minister of the Hellenic Republic, on November 18, 2020, in Abu Dhabi. The two leaders met to discuss further strengthening and expanding the solid bilateral cooperation between the two countries based on the close ties of friendship and the common understanding of the growing challenges in the region that call for further coordinated action.

On this occasion, and building on the significant steps already made towards advancing bilateral relations, both leaders have officially launched the Comprehensive Strategic Partnership between the United Arab Emirates and the Hellenic Republic, aiming at result-oriented exchanges, initiatives, and joint action in key areas of mutual interest.

The two governments stress their unwavering commitment to international law and the UN Charter and the principles enshrined therein as the foundation of peace, security, good neighborly relations and peaceful resolution of disputes for all countries in the region.

In this regard, the Abraham Accord signed between the United Arab Emirates and Israel on the establishment of relations constitute a historic accomplishment contributing to peace, stability, and mutual understanding among the peoples of the Middle East.

The two governments affirm their commitment to the principle of non-interference in the internal affairs of states, underscoring the necessity of coordinated action among the international community to counter ongoing regional interference and uphold respect for the sovereignty of states.

The two governments condemn Turkey’s violations of the sovereignty and sovereign rights of the Hellenic Republic and the Republic of Cyprus, as well as its overall aggressive conduct in the Middle East, Southeast Mediterranean and South Caucasus in blatant violation of international law and recall the obligation of all states to abstain from the threat or use of force as reflected in the UN Charter.

In this vein, the two governments call upon Turkey to conform with international law and immediately cease all of its illegal and provocative actions.

Moreover, the two governments express concern over the export of terrorism and extremism throughout the region and exploitation of conditions in areas of conflict. The two sides affirm their shared commitment to combating terrorism and extremism in all of its forms and urge the international community to take a firm stance against this aggression.

The two governments also agree to the added value of further broadening their cooperation with and within regional and multilateral mechanisms.

In this regard, the Hellenic Republic is committed to playing a constructive role in contributing to bolstering the historical and friendly ties between the UAE and European Union.

The UAE-Greece Comprehensive Strategic Partnership includes, but is not limited to, the pillars outlined below:

Political Cooperation and International Humanitarian Development:
The UAE and the Hellenic Republic have agreed to strengthen their political dialogue and strategic consultations and increase their alignment on regional and international issues of mutual interest. The two governments have also agreed to jointly work on international humanitarian projects and development initiatives and bolster their cooperation in multilateral fora.

Trade, Investment, and Tourism:
The two governments will further advance their economic relationship in order to bolster their trade, investment, and tourism ties. They will facilitate the exchange of expertise and information in all areas related to joint investment of common interest, support for SMEs and entrepreneurs, the development of business networking structures encouraging cooperation, such as incubators and clusters, and measures to enhance capacity building and the promotion of entrepreneurship in both countries.

Culture:
In recognition of the importance of enhancing the mutual knowledge and understanding of the cultural heritage of both countries, the two governments will advance cooperation in the field of cultural creative industries, focusing on architecture, design, performing arts, fine arts, cinema, literature and publications, and cooperation between museums and cultural institutions.

Energy:
The two governments will amplify their energy partnership in the fields of energy transition, petrochemicals, and sustainable and clean energy, in addition to the sharing of technical knowledge, skills, and expertise.

Digital and Government Services:
The two governments will advance their cooperation regarding digital activities and government services, with a focus on government accelerators, smart services, government performance, innovation and excellence, strategic foresight, planning, and strategy management.

Food & Agriculture:
The two governments will strengthen their cooperation in the areas of food, agriculture, and fisheries, as well as promote related projects and partnerships to advance their joint food security strategies and objectives.

Defense:
The two governments have also emphasized their readiness to amplify defense cooperation and explore new possibilities in this field, with the objective of effectively addressing common challenges that threaten regional and global peace, security, and stability.