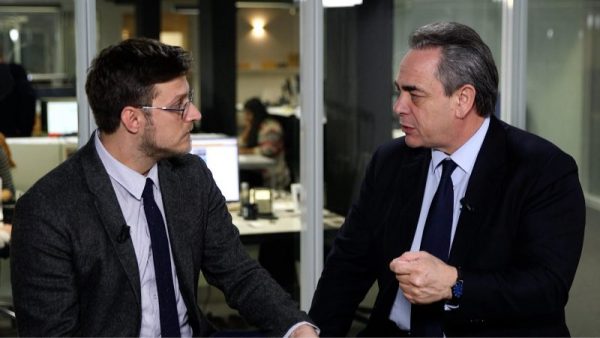 The Novartis scandal in Greece exists and the people responsible for it should be dealt with quickly in order to avoid a “social eruption”, Greek business leader Konstantinos Michalos told EURACTIV.com in an interview.

The Novartis investigation in Greece was launched in mid-December 2016 with evidence of bribery of thousands of state officials and doctors in order for Novartis to get preferential treatment in the market.

He said that “this is an imported scandal” and explained that “it was the US justice department, the US government and the FBI who discovered the mother company with a number of wrongdoings”.

“Let’s finish off this situation as quickly as possible because anything else will continue to poison the political and social life and this is the last thing we need at the moment,” Michalos warned.

On 22 February, the Greek parliament decided to form a special committee to investigate the role of ten politicians from the opposition parties who appear in the case file.

Michalos noted that there had been scandals in the past which did not receive so much attention due to the good financial outlook at the time.

But in this particular case, it risks leading to “a social eruption”, the Greek business chief warned, claiming that people are extremely angry that the allegations date from the 2010-2014 period.

“During this period pensions were lowered, the unemployment level was rising, businesses were shutting down […] until 2014 we had 225,000 SMEs locking up and during that time, there are allegations that some people, political personnel or pharmaceutical companies and doctors, were having a party.”

Commenting on the fact that former Prime Minister Antonis Samaras, who appears in the case file, had sued the current leader Alexis Tsipras, as well as the prosecutors, he said there was a risk of further polarising the country’s political environment.

“For a former prime minister to sue the current prime minister, it raises certain questions. But […] suing the representatives of the independent justice in Greece, that creates even more question marks.”

The day after the bailout

In August, Greece is expected to successfully exit the bailout programme after almost nine years of exhausting austerity measures.

Michalos expressed his optimism about the post-bailout period, saying Greece needs to draw up its growth strategy itself. “One thing is for certain: we cannot go back to old habits.”

Contrary to a “wrong” economic mixture imposed on Greece by its lenders during the crisis times, which delayed the bailout exit, Michalos stressed that Athens has a “golden opportunity” to design a growth plan that incorporates all the positive elements of the economy.

Asked whether this growth plan should be approved by the opposition parties as well, he replied: “I simply don’t care if they want or not. They have to. This is a national necessity and they have to understand that.”

“Just imagine you are trying to convince your lenders or potential investors that you are going to follow a particular growth plan that will maybe be reversed after one-and-a-half years, when we will have a national election. Obviously, this does not provide the necessary confidence in the country.”

As for the application of a credit line support system for the Greek economy, he said the business community would welcome it.

This would primarily be due to the confidence level that such an action would provide to potential and existing investors in Greece, as well as the assurance of low-interest rates for the borrowers, he explained.

“It is a fact that until we repay 75% of our existing loan obligations towards our EU partners and lenders, we will be obliged to operate under a wider supervisory system, so it remains to be seen how competitive these terms will be.”

Michalos also met on 23 February with EU Enlargement Commissioner Johannes Hahn and discussed the developments in the Balkans.

Regarding the crucial talks on the Macedonian name dispute, Michalos admitted there were financial benefits from the accession of the former Yugoslav Republic of Macedonia (FYROM) to the EU.

But he made clear that the EU needed to fully respect the case that has been put forward by the Greek government, meaning a compound name with a geographical qualifier before the word “Macedonia”. The dispute had arisen because the name Macedonia is the same as that of a northern Greek province.

“Both FYROM and Greece have a lot to gain by finding a common solution. I am sure in the next months we will be able to find this solution.”

“This is an opportunity we cannot miss. The name of FYROM could be the first opportunity of the Greek political system to be able to finally collaborate at a level that we expect as business leaders and society in general.”