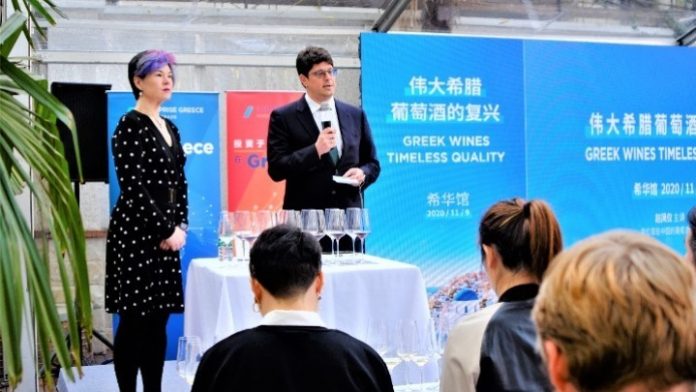 More than 100 wine importers and sommeliers participated in a promotional event in Shanghai, China for the introduction of Greek wine to the Chinese market on Monday.

Participants were greeted by Consul General Vasileios Koniakos, who stressed that this was the first wine-related event of such scope and magnitude, a consulate statement said, to expose Chinese wine-tasters to the history and features of Greek winemaking. Koniakos noted that tastings and related events for experts in Greek wine will contribute to improving Chinese consumers’ familiarity with the unique characteristics of Greek wine.

The main event included a two-hour lecture on Greek wine, titled “Greek Wines, Timeless Quality”, by China’s leading sommelier Zhao Fengyi (Master of Wine). She presented a selection of Greek wines, citing historical facts about each variety, and talked about the special geographical and geological conditions behind the cultivation of Greek varieties, pointing out their compatibility with a broad range of accompanying dishes.

After the lecture, participants had the opportunity to taste several different versions of Greek wine varieties available today in the Chinese market, as well as labels presented by importers of Greek wines that are yet to be imported in bulk to the Asian market.