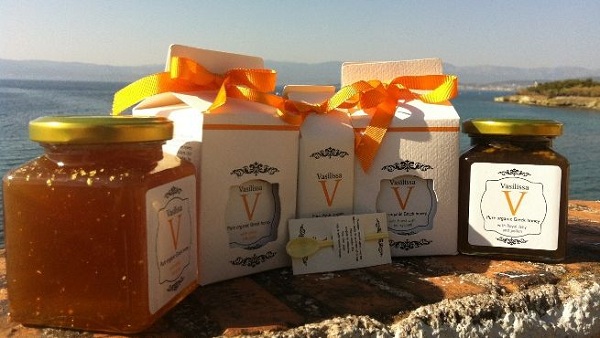 The name “Stayia” came from the two owners’ names, Stavroula and Yiannis, but at a coincidence in ancient Greek the word means platanus tree.

“We are official honey suppliers of the kingdom of Qatar,” they told ANA, adding that the 24K honey was exclusively distributed in Arab countries, although exports are also made to America, Canada, European Union and Asia.

The company was founded with the aim to be established in the Greek and international markets by promoting the quality characteristics of Greek honey and other traditional food, like pasteli (a sesame/honey bar)

“The infused-honey idea exists abroad but with a disadvantage the lack of honey variety. Greece produces the unique thyme honey, which is superior from usual honey varieties sold in the market, with only a few exceptions which are not infused with ingredients such as edible gold. This product was created after a lot of thought and research,” they said.

Stevi has graduate as pedagogue, while Yiannis has studied accounting and was a professional football player in Greece and abroad.

After the success of the gold infused honey, the two have created a series of honey infused with truffle, lavender, hot chili, Chios mastic and cinnamon.