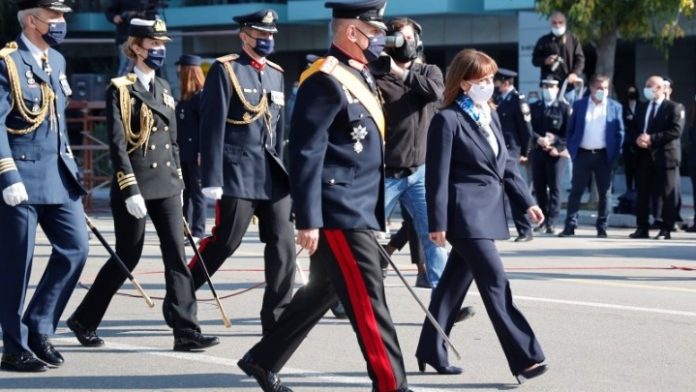 The parade took part along the coastal avenue of Megalou Alexandrou and lasted approximately one hour. The public was required to wear masks.

Prior to the parade, Sakellaropoulou lay a wreath at the Monument of Heroes of the 3rd Army Corps in the city.
The anniversary commemorates “a glorious moment in our history, when Greeks refused to surrender, faced the fascist invasion heroically, and utterly defeated a superior enemy,” the president said after the parade’s conclusion, reminding Greeks “of what we may achieve when we are united.”

Sakellaropoulou also expressed her gratitude to the Armed Forces for safeguarding Greece’s security and defending it against all enemies. Additionally, she spoke with the F-16 pilot in the Zeus formation who had carried out an aerial demonstration above the parade and crowd and who sent his own good wishes to fellow Greeks.

Following the parade, two parachutists demonstrated a free fall from a military helicopter holding a Greek flag, landing before the officials and handing over the flag to Sakellaropoulou. Besides a flyover by fighter jets and helicopters, the refurbished and historic World War II Supermarine Spitfire of the Hellenic Air Force also flew over.

Attending the parade were the National Defense Ministers of Greece and Cyprus, the chief of Hellenic National Defense General Staff, ministers, members of Parliament, and regional officials.