The year 2018 ended with a new historical record for Greek tourism, with 33 million international arrivals and revenues of more than 16 billion euros, Tourism Minister Elena Kountoura said on Tuesday in an interview with Alpha TV.

The minister stressed the enormous contribution of tourism as a whole to the Greek economy, which affected all the productive sectors, such as trade, construction and real estate.

She referred to the strategy of the Tourism Ministry and the next moves to continue the excellent course of Greek tourism in 2019, as well as to maintain the double-digit increase already recorded in the foreign markets.

The year 2019 will be a demanding and difficult year, the minister said, referring to a series of challenges. Brexit is expected to bring turmoil across the European economy, as are the successive elections in Europe, the problems faced by low-cost airlines that affect flight planning, as well as greater competition from non-EU countries that adopted aggressive “subsidisation” policies in tourism and had advertising budgets that were many times that of Greece.

Kountoura stressed that she will have meetings with British and European tourism industry operators in order to minimise the impact of any problems and to ensure the flow of tourists to Greece continued to increase.

Asked about political developments, she stressed that national interest supersedes all, including the interests of political parties or the political and personal cost.

Clarifying that she welcomed political criticism, she nevertheless denounced the use of “lies and slander” or personal attacks and attempts to target her by political opponents, noting that these gave extreme elements the right to seek to intimidate and terrorise those not subscribing to their views.

“I have not succumbed and will not succumb to intimidation,” she stressed and called on the democratic forces, to bravely “erect a wall” against such tactics. 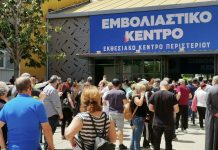