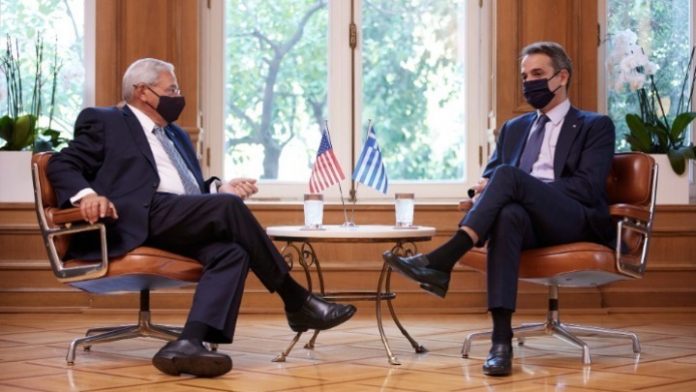 Regional and international issues of common interest, with an emphasis on developments in the wider region, the Eastern Mediterranean, North Africa and the Balkans, as well as the Middle East, focusing on the situation in Afghanistan, were discussed during a meeting between Prime Minister Kyriakos Mitsotakis with US Senator Robert Menendez on Thursday.

Mitsotakis underlined that “we are really looking forward to the completion of the U.S.-Greece Defense Partnership Act of 2021, which I believe will be a milestone legislation that will further cement the progress we have made in our bilateral relations.”

On his part, the US senator praised Greece’s leadership in various issues, including democracy and tackling climate change, as well as in the recent “challenge of fires,” where he highlighted the fact that lives had been saved and noted that, while property is always something to lament the loss of, lives are the most important thing.

The meeting also noted the very high level of Athens-Washington relations, as well as the even greater potential for their continuous expansion and deepening.

Menendez, a longtime friend of Greece, as government sources pointed out, is visiting the country for contacts with the state and political leadership on the occasion of the 200th anniversary since the 1821 Greek Revolution that founded the modern Greek state. Menendez will speak on Thursday, at 21:00, at the Acropolis Museum, at an event organised by the “Greece 2021” Committee, in the context of the Forum “Greece in 2040”.