Construction, pharmaceuticals, digital technologies, the supply chain, tourism and culture are among the sectors of the Greek economy for which significant business and investment opportunities arise in the Saudi Arabian market. The conditions for the food and beverage industry are also excellent, as Saudi Arabia imports most of its food products due to its geographical and climatic conditions. Similarly, there is a great need for water resources, waste and energy management services. These opportunities were highlighted during the Foreign Ministry’s business mission, which took place in Riyadh on March 12-14, with the support of the Hellenic Federation of Enterprises – SEV, the association said in a statement.

The mission was led by the Minister of Development and Investment, Mr. Adonis Georgiadis and the Deputy Minister for Economic Diplomacy and Extroversion, Mr. Costas Frangogiannis. The mission on behalf of SEV was accompanied by Mr. Efthymios O. Vidalis, Chairman of the Executive Committee, Dr. George Xirogiannis, Deputy General Manager and Mr. Achilleas Konstantakopoulos, Co-Chair of the Greek Section of the Business Council of Greece-Saudi Arabia.

As part of the visit, the official “launch” of the newly established Business Council of Greece-Saudi Arabia took place, an initiative of the  and the Confederation of Chambers of Saudi Arabia. 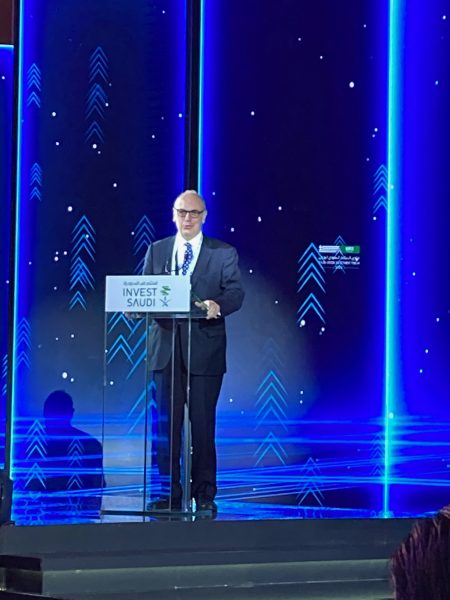 After the meetings, Mr. Vidalis stressed the need for further promotion of cooperation, through the increase of bilateral trade, but also investments in critical sectors of our economy. As he underlined, “the establishment of the Council is a very positive step in strengthening the economic relations between the two countries. SEV attaches particular importance to promoting extroversion and will continue to actively support Greek companies in their quest to internationalize and penetrate new markets.”

According to SEV, Saudi Arabia remains an important economic center, backed by a business environment that favors exporters and investors and takes them to the heart of the Arab market. It is located in the center of a rapidly growing region, with more than 424 million consumers and holds a truly exceptional geographical position in the world, in terms of supply chain, international trade and investment.

The Saudi market has been for many years one of the leading markets in the Middle East for Greek products. It also contributes to the Greek economy through tourism and, mainly, through investments. Greece’s exports to Saudi Arabia increased by 105% in 2021 compared to 2020 and bilateral trade reached 1.3 billion euros.