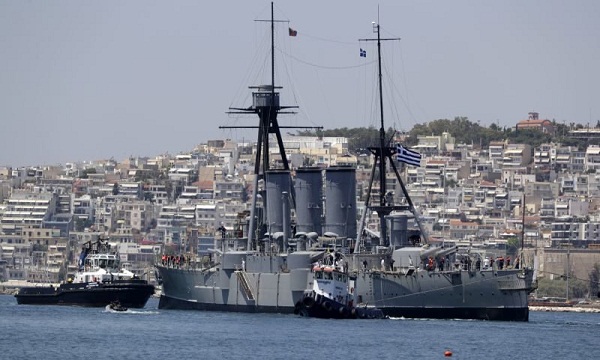 Tours of the historic Greek warship “Averoff” started in the city of Thessaloniki on Tuesday and will continue until its departure from the city. The ship is visiting Thessaloniki for events marking the October 28 national holiday, when Greece celebrates ‘Oxi’ day and its defiance of Axis forces in World War II.

The history-steeped Pisa-class armoured cruiser – the last ship of its type ever commissioned worldwide – has docked in Thessaloniki for the first time in 72 years, after sailing the Aegean once again from Piraeus, where it is normally docked and serves as a floating museum.

Talking to the Athens-Macedonian News Agency’s Thessaloniki-based radio station “Praktoreio 104.9 FM” on Monday, the ship’s commander Captain Sotiris Charalambopoulos invited young and old to tour the historic vessel, stressing that it “constitutes a unique part of Greece’s territory, which has never once lowered the Greek flag in 106 years.”

Bought with the help of a wealthy Greek benefactor, George Averoff, whose name she subsequently received, the ship was launched on 12 March 1910 and its action was said to have played a decisive role in the outcome of the First Balkan War while, according to its commander, “it flies one of the two most important flags in Greece (the other is flies on the Acropolis Hill).”

Visiting hours for the vessel before and after October 28 are as follows:

From October 10 until October 28

From October 29 until departure:

The ticket for adults is 3 euros, while tours will be given in groups of 40 for both schools and the general public.

The ship will be closed to visitors when events are being held on the ship.