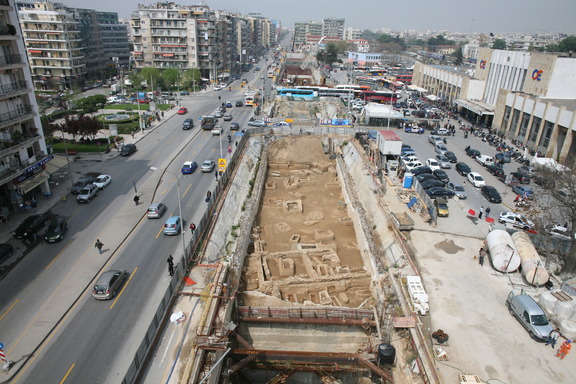 It would be a “huge crime” if the government were to go ahead with a decision to remove the antiquities found at the Venizelos metro station in Thessaloniki – currently under construction – in order to speed up the pace of work and deliver the city’s metro system sooner, former Thessaloniki mayor Yiannis Boutaris said on Wednesday.

Boutaris made the statement during a press conference held at a central Thessaloniki hotel by the “Citizens’ Movement for the Protection of Cultural Heritage” regarding the decision, in which he claimed that the prime minister “has been badly informed by a group of people that have certain interests.”

Flanked by archaeologists, local government officials and members of the legal profession, Boutaris insisted that the Movement was in no way political and would not become so, adding that he would seek a meeting with Prime Minister Kyriakos Mitsotakis on the issue.

The Movement is asking people to sign a petition for the antiquities to remain in situ, which has so far been signed by 6,000 people.

“It would be a huge crime to remove the antiquities at Venizelos station. They are not telling us where they will go or where they will be stored or what state they will be in once they return,” Boutaris noted, saying he would fight for the decision to be reversed.

The former mayor said he understood the impatience of Thessaloniki residents, especially shop owners, with the delay in the construction of the metro but insisted that the decision was a mistake:

“When the antiquities were discovered, the BBC did a whole segment and compared the finds to Pompeii,” he said, pointing out that it had taken Rome seven years to complete a part of its metro system when a similar situation had arisen.

He was particularly opposed to a suggestion that the antiquities be moved to the Pavlos Melas municipality, stressing that they belonged to the municipality of Thessaloniki, and described the meeting held by Central Macedonia governor Apostolos Tzitzikostas as “one-sided,” accusing the governor of “never having concerned himself with the metro”.

The outgoing head of Attiko Metro Yiannis Mylopoulos, who had signed off on a solution that would have allowed the antiquities to remain in place during the station’s construction, denied that there were “no plans” for the station’s construction and insisted that it would have been completed in 2023 using a solution that was “technically difficult but feasible and internationally recognised”.

The decision to remove and then return the antiquities to the station was “bad for four reasons”, Mylopoulos added, claiming that it would delay construction until 2024-2025, cost more money, jeopardise the integrity of the monument and divide the city.

An archaeologist and former head of Thessaloniki’s Byzantine Antiquities Ephorate, Despina Makropoulou, was strongly critical of the government’s decision, which she said was “backtracking and the only thing we should not do.” She also claimed that in the case of the Agia Sofia station in Thessaloniki, where the removal-return solution was adopted, “many of the antiquities that left Agia Sofia station, after removal, do not fit to go back and we don’t know where they are.”

Other experts, such as architect and civil engineer Vassilis Koniordos, said the antiquities found were made of fragile building materials that might well not survive the process of removal and repositioning while lawyers in the movement said that all legal action will be taken to prevent this happening.