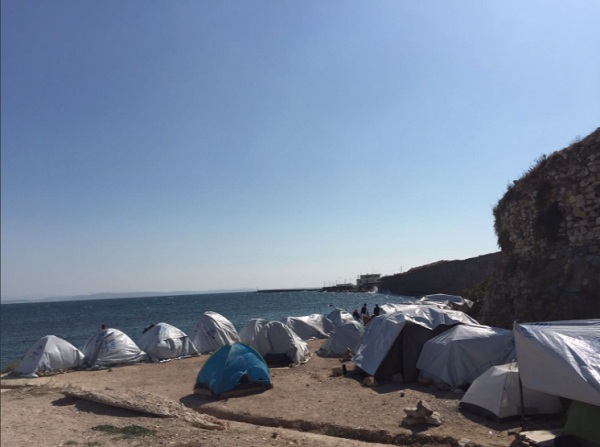 When I walked into their tent in Souda migrants’ camp on the shores of Chios island in Greece, I was struck by his first gesture: to offer me fruits, tea, and water. I didn’t even know his name yet.

He asked me not to share his real name, saying the Taliban have circulated his photo and he feels his life is at risk. They killed his father and uncles. “Losing a life in Afghanistan is so easy,” he said.

Hadiye, 28, made the treacherous journey from Kabul to Chios with his wife and three young children. It took them more than 50 days.

His goal was to flee to safety but that’s actually not his main worry in the camp. Nearly every other night, he explained, fights break out among the asylum seekers, amid mounting despair at conditions and their inability to move on to other EU countries.

There are about 1,150 people in the camp, 150 of them single men living just across from the family’s tent, separated only by a flimsy fence. Many of them drink every night.

Two weeks ago, a late-night fight broke out, Hadiye’s four-year-old daughter watching as one group of men sprayed a fire extinguisher at the other. She screamed in horror, then fainted.

She hasn’t been the same since.

She has headaches, can’t sleep, and has regressed to wetting her pants, day and night. Doctors gave her medicine to keep her calm, but this has run out. The day I visited them, she started crying uncontrollably and was taken to hospital.

“The situation’s getting worse day by day; the violence is everywhere. Even against women and children,” a psychologist working in the camp told me.

Hadiye’s family has also been dealing with mental stress around the unknown. Afghans are excluded from the list of nationalities eligible for relocation from Greece to other EU member states. Latest figures show that about half of Afghans in Europe fail in their asylum claims, and now face return to Afghanistan under a new EU deal.

A palpable fear in his voice, he asked me: “Will I get my papers so I can find a job, support my family – or do I need to stay here more time without knowing?”

Hadiye went to see a doctor in the camp about his anxieties. “They gave me Panadol,” he told me. He is keen to speak with a psychologist, as are so many asylum seekers I spoke to across Greece this week. They have witnessed and experienced so much trauma in their home countries, but continue to struggle now. There is a massive need for psychosocial support, but people are not getting it. Greek authorities and the UN refugee agency should consult with aid workers to identify why access to this support is so poor, and fix it.

Hadiye regrets putting his family through so much. “We need to have a human life,” he told me, with pain in his eyes. “But these are not human conditions here.”