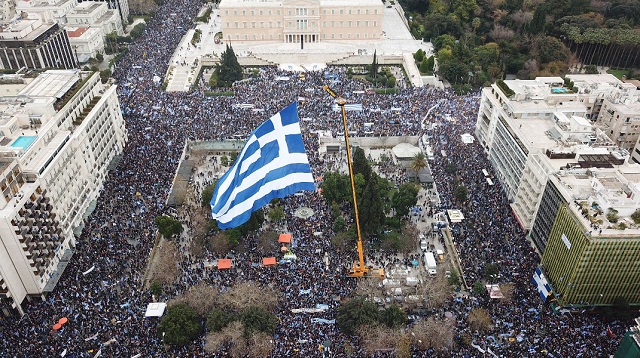 Thousands of Greeks staged a mass rally in Athens Sunday, urging the government not to compromise in a festering name row with neighbouring FYROM.

As a huge Greek flag flew over central Syntagma Square, Greeks from all over the country and abroad chanted “Hands off Macedonia”, “Macedonia is Greek” and “We won’t leave until we are vindicated”.

Athens objects to Macedonia’s name, arguing it suggests that Skopje has claims to the territory and heritage of Greece’s historic northern region of the same name.

However, leftist Greek Prime Minister Alexis Tsipras has been considering a resolution to the 27-year-old dispute, angering many opposition members and his own nationalist coalition partners.

Among those in the crowd was former premier Antonis Samaras — who was foreign minister when the name dispute began in 1991 — along with mayors, senior clerics and army officers.

Organisers estimate around a million participants on Syntagma Square but according to a police announcement the number is much lower, approximately 140,000 people. 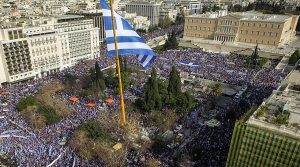 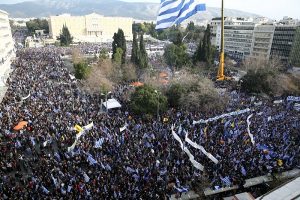 “Macedonia is Greek and only Greek. They are trying to steal history. We all have to fight and let the world know,” said Allia Sarellis, a member of the Greek diaspora who flew in from the United States.

Around 2,500 buses from northern Greece and two ships from Crete brought thousands of demonstrators, reports said. Police declined to give numbers.

Some protesters wore traditional garb, including the uniform of Greek guerrillas who fought Bulgarian bands and Ottoman forces in Macedonia in the early 20th century.

“Thousands of Cretans have shed their blood for Macedonia,” a bearded Cretan protester told Skai TV.

The protest — the second on the Macedonia issue in a fortnight — has been organised and funded by Greek diaspora groups, with the support of retired officer associations, cultural unions and church groups.

Renowned Zorba the Greek composer Mikis Theodorakis will be the keynote speaker despite battling health issues at 92.

Theodorakis has trouble walking, but was galvanised after self-styled anarchists vandalised his home with red paint late Saturday. “I am calm and ready,” the resistance icon said after the incident, urging rally participants “not to be intimidated”.

Anarchists were planning a counter-protest nearby, with riot police deployed to keep the two crowds apart.