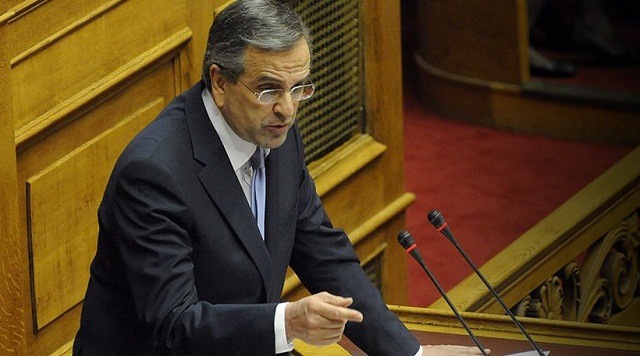 Addressing Parliament during the debate on the Novartis affair on Wednesday, former premier Antonis Samaras utterly rejected the witness testimony linking him to the case and accused the government of setting up the “biggest political frame since the formation of the Greek state”.

“I am not here to reply to this vile slander. I did not come to explain myself. I came to denounce,” Samaras said, attacking Prime Minister Alexis Tsipras and Alternate Justice Minister Dimitris Papangelopoulos as the “architects” of the case against him.

“The entire case has the fingerprints of the political supervisors. I am talking about Tsipras and Papangelopoulos,” Samaras said.

“If they put nameless, supposedly protected supposed witnesses to fling mud with baseless accusations, without a shred of evidence and with conflicting witness accounts, where exactly are we,” Samaras asked, accusing the government of fabricating the case and instructing the witnesses what to say.

“First they wrote the script, then they started to promote it and finally the actors were slotted in. You did not search for the guilty. You had chosen them yourselves much earlier on. The protected witness that tries to embroil me testified four times without saying anything about me. And then he suddenly remembered the former prime minister Antonis Samaras…” he said.

Samaras also defended his own government’s record in lowering the spend on pharmaceuticals, saying it had passed measures that drastically curbed corruption while SYRIZA had voted against them and backed big pharma.

He ended by stressing that he would ask that his bank account records be made public himself “and not hide behind the statute of limitations”.