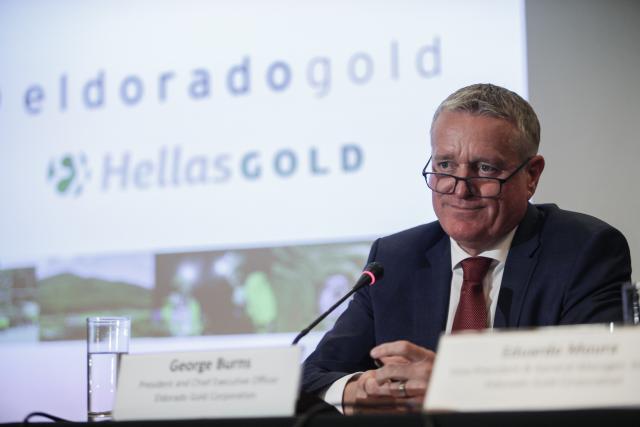 Speaking to reporters, during a news conference, Burns expressed his confidence that the company’s investment will be completed in the long-term. “I think we can find a solution through dialogue,” he said.

He added that a company decision to suspend operations in Greece was taken because a provisional operational license for Olympiada was expiring on September 21, while a series of licenses for Olympiada and its unit in Skouries were still pending.

Burns urged the government to think of the company’s workers and what a non-approval of the licenses would mean for them, adding that he was open to holding sincere and productive talks with Prime Minister Alexis Tsipras – to whom he has sent three letters without getting any reply – and with Environment Minister George Stathakis to find a mutually satisfactory and beneficial course forward for the investment.

Referring to the 1,100 workers directly employed in the company, Burns said he will gradually dismiss them over a period of two or three months. He said that Eldorado has invested 2.0 billion US dollars to acquire the mines and 1.0 billion US dollars during the five years of its presence in Greece. “We have suffered economically but we are not in a position to evaluate the size of losses at this stage. If there is no solution to the current problem, we will use every legal means in Greek courts and international arbitration,” he noted.

Burns said that during his 40 years of activities around the world he has not faced such problems and that the company would not have undertaken the investment risk if it knew of these problems. He urged the government to act in accordance with existing laws and regulations and to speed up licensing approvals, adding that “licensing approvals cannot be allowed to be held hostage by political positions or an agenda imposed by a loud minority”.