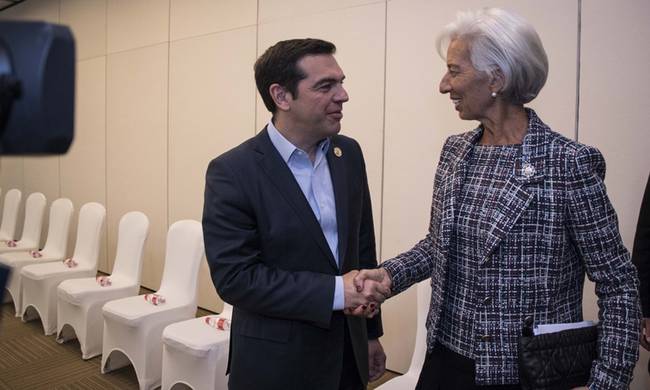 International Monetary Fund managing director Christine Lagarde congratulated Prime Minister Alexis Tsipras for the progress his government achieved in economic reforms, in a tweet and a message after their meeting on the sidelines of the World Economic Forum in Davos on Thursday.

In both, Lagarde reiterated the IMF’s support of Greece’s adjustment programme, as well as its position that debt relief by Greece’s European partners is necessary for sustainable growth.

The IMF chief’s statement reads in its entirety as follows:

“It was a pleasure to meet with Prime Minister Tsipras in Davos today. I congratulated him on the progress Greece has achieved, a sentiment that was also reflected in the recent Eurogroup statement, and assured the Prime Minister of the Fund’s continued support for Greece’s adjustment program. I also underscored that the completion of the reform agenda and provision of debt relief by Greece”s European partners are essential to support sustainable growth and a successful exit from official financing later this year. The Prime Minister and I agreed to work together toward these shared goals.”

Soon after their meeting, Lagarde had posted a tweet congratulating him on Greece’s economic reforms and stating, “We agreed to work together toward the shared goals of completing reforms and securing debt relief from Greece’s European partners, which are essential for sustainable growth.”