Volatile growth data over 1H19 suggested that the Greek economy is still in search of a sounder growth pattern. The unequivocally strong recovery in business and consumer confidence has yet to match hard domestic demand data, be that private consumption or gross fixed capital formation.

The passage of the baton of growth from exports to domestic demand proved to be short-lived, and the latest national account numbers confirm this.

As in 2Q19, the main driver was net exports, on the back of strong export performance and soft import growth. The latter likely followed poor fixed capital formation and soft private consumption growth. A puzzling pattern, given persisting global headwinds weighing on international trade flows.

Looking at consumer confidence, we would have expected stronger consumption data, but topping employment numbers over the summer months might have tamed the positive impact of rising minimum wages and of the VAT-induced deceleration in inflation on disposable income. Gross fixed capital formation remains the soft spot in the Greek picture and the new Mitsotakis government seems well aware of its relevance.

With insufficient resources to rev up investment domestically, PM Mitsotakis seems to be eyeing foreign investors to kick start the process. The memorandum of understanding recently signed with Chinese president Xi to overcome obstacles to implement Cosco’s investment plans in Piraeus port is a case in point. 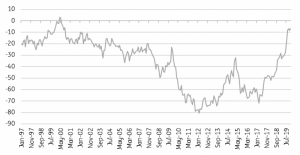 Tax cuts to propel consumption, what about investments?

As promised during the election campaign, prime minister Kyriakos Mitsotakis is trying to implement his tax cut plans, in some cases in contrast with creditors’ recommendations.

The plan foresees, among other measures, cuts to the personal income tax rate for the lowest bracket, an increase in the tax-free threshold for households with children and a reduction in the business tax rate. We expect that the combined effect of tax cuts and continued, if decelerating, improvement on the employment front will help to revive private consumption in the course of 2020.

We are less sure that they will be as effective in propelling private investment, as this might still suffer from unfavourable dynamics in bank credit (Greek banks are still burdened by a heavy load of NPLs) and of the incomplete implementation of structural reforms, whose completion will remain a tough challenge for the centre-right government.

Fiscal discipline continues to pay off

For the time being, the fiscal picture is following the post-programme expected path. Primary balance data released up to October suggests that Greece will again outdo the 3.5% of GDP post-programme target this year and the draft budget targets it at 3.7% for 2020.

As expected, the new Greek government chose not to challenge the post-programme targets in 2020; it might when it will discuss the 2021 budget draft, but we expect this to happen in a constructive way. Commitment to fiscal discipline is apparently being acknowledged by both markets and official lenders. Spreads of 10-year Greek government bonds on German bunds have fallen by some 100bps since the Mitsotakis government took office, and lenders have not turned a deaf ear to the Greek government requests for debt relief measures.

Upon the consent of the ESM, in November, Greece paid back some €2.7 bn of its existing IMF loan, which was granted on much worse interest rate conditions than the ESM ones. On the same line, on 5 December the Eurogroup decided to return the profits made by European central banks on Greek government bond holdings as part of the SMP and ANFA programmes.

Having paid a high economic and social price for the consequences of the debt crisis, the Greek economy continues recovering, even if is at an unspectacular speed. We expect it to outperform the eurozone aggregate over our current forecast horizon. 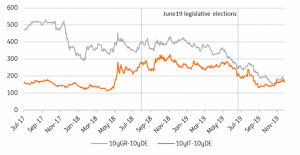