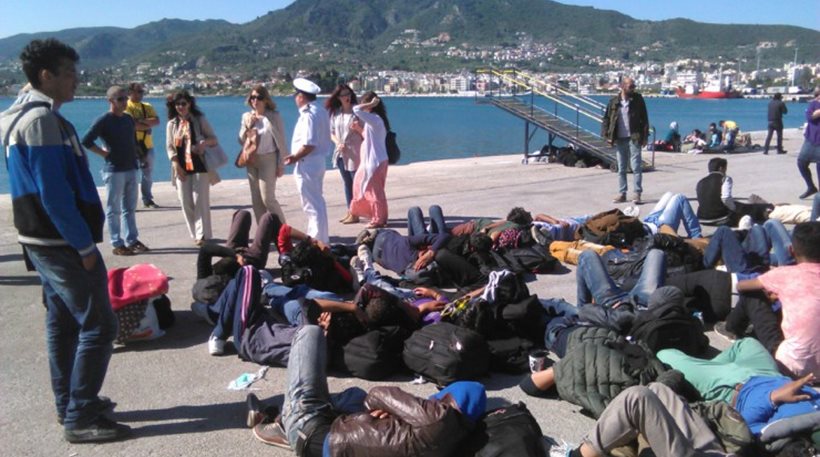 During a press conference on the refugee issue, Christodoulakis noted that officials of the Economy ministry will be transferred to to the Migration Policy ministry to help assess the crisis.

Alternate Migration Policy Minister Yiannis Mouzalas earlier said that the measures taken by the caretaker government aim to decongest the islands in order to keep the flows to levels that local communities can deal with, but also without creating sites of congestion in Athens.

“Four million refugees and migrants in Turkey may now be waiting to get across, and I am obliged to reveal these data and inform out partners,” alternate Shipping Minister Christos Zois said at a press conference. According to Zois, 36 percent of the total of 240 vessels of the Coast Guard are immobilized, while four out of seven aircrafts are also immobilzed, and only one out of six helicopters fly.

Prime Minister Vassiliki Thanou discussed the issue of migration and the inflow of refugees in a meeting with the Vice-president of the European Commission Frans Timmermans and the Commissioner for Migration, Home Affairs and Citizenship, Dimitris Avramopoulos at Maximos Mansion on Thursday.

“Our government, albeit caretaker, is called upon to tackle a very important issue, the wave of migrants, mainly refugee flows. We have already decided on further measures,” Thanou said.

“The issue is European and international. Our government, throughout its term, will continue to work closely with the EU to address the issue,” she added.

Timmermans noted that Europe is dealing with an unprecedented humanitarian and political crisis to which it needs to find European answers, adding that no member-state can deal with the problem alone.

“Greece has been particularly affected and hit, I would say, from this crisis; we all see it daily. I think there is no man with a soul who has not been terribly shocked by the photos of the baby we saw yesterday on the Turkish coast,” he said.

The EU official also said that too many refugees arrive first in Greece adding that he and Avramopoulos are in Athens to try to find a way to help Greece deal with the problem.

Exiting Maximos Mansion, Avramopoulos said: “The migration and refugee issue has taken uncontrollable dimensions in Europe and Greece, as one of the main gateways, feels this pressure and is called on to take some measures with the full economic, political and technical support of the EU.” He added he and Timmermans want to send a message of solidarity and support to the country.

On Friday the two officials will head to Kos where they will also hold a press conference.