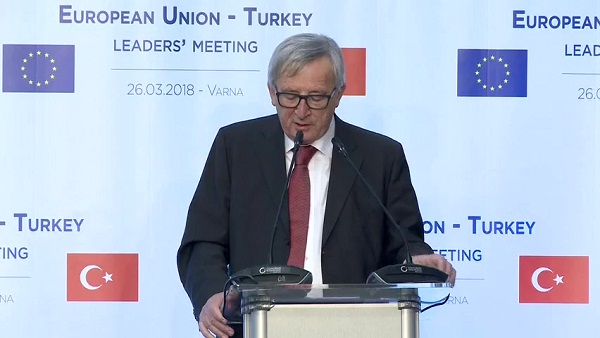 Juncker said that Turkey must make an effort to resolve the issue of the two border patrol officers, who were detained for crossing into Turkish territory earlier this month. He expressed the EU’s confidence that the issue would be resolved, if possible before the Greek Orthodox Easter. “We trust that the Turkish authorities will resolve this issue in a just way, and I hope this issue will be resolved before the Orthodox Easter this year,” Juncker said.

Juncker also said that if Turkey wishes to progress on its EU accession, it needs to improve its relations with members states within the EU, in particular with Greece and Cyprus. The Commission president stressed that he “was never in favor of stopping negotiations with Turkey” and underlined he supports the country’s efforts to join the EU.