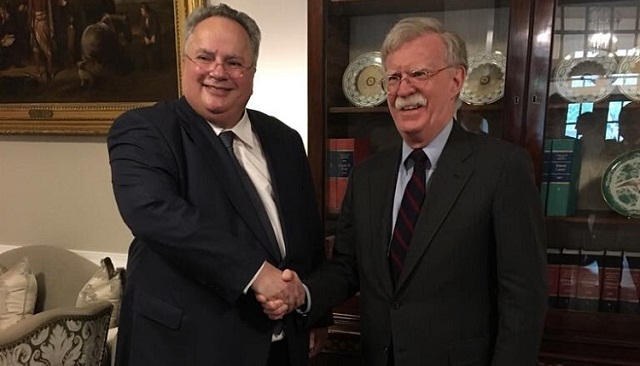 The expansion of strategic cooperation between Greece and the United States, along with a number of issues of common geopolitical interest, were raised at the meeting between Greek Foreign Minister Nikos Kotzias and US President Donald Trump’s national security advisor, John Bolton, at the White House.

The strategic relationship between the two countries aims to promote cooperation in a number of areas such as energy security, agricultural policy, education, culture, as well as the economy and investments. Particular emphasis was placed on energy-related issues related to the safeguarding of energy resources for countries which are owners of natural resources, such as Cyprus, Egypt and Israel.

The American side now recognizes that Greece has re-emerged dynamically on the international scene and has regained a key regional role. At the same time, the US welcomes Greece’s active foreign policy, which promotes stability and peace through the strengthening of regional cooperation and the establishment of a positive agenda aimed at closing a series of open issues.