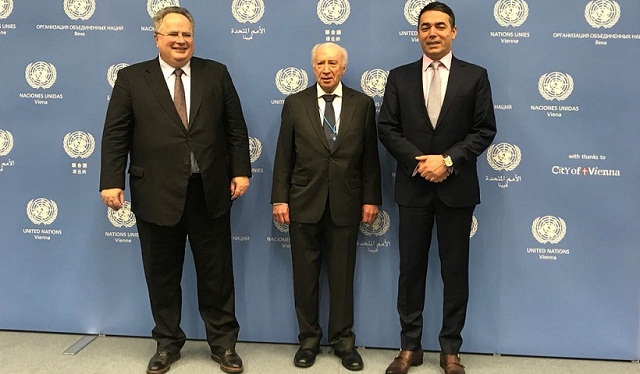 Greece and FYROM are preparing “for a big step forward” toward resolving the name issue, Foreign Minister Nikos Kotzias said in Vienna on Friday, following the conclusion of a new round of talks under the aegis of the United Nations.

Responding to press questions about whether the two countries were closer to an agreement, the Greek foreign minister said “I am hopeful that at our next meeting we shall be able to take a big step forward,” and declined to give any details. Both sides, he stressed, had agreed on detailed plans for the necessary future steps.

Asked for a comment on whether progress had been made, Kotzias said, “I think the steps we are taking are difficult, but they are bringing us closer to the possibility of a solution,” and said both sides had agreed on the method to be used towards a solution.

At the talks, he said, a detailed record was made of the issues of agreement and differences, and each country determined its crucial issues.

The talks were held at the Austrian foreign ministry, as the United Nations offices in Vienna were unavailable because of the Catholic Easter holiday. Brief statements by UN special envoy on the name issue Matthew Nimetz had been made earlier.

UN special representative for the FYROM name issue Matthew Nimetz expressed his optimism and said that progress had been made on all fronts.

In his brief statements, the UN’s long-term special envoy on the name issue noted, “I can say that, without getting into any details, difficult issues were addressed – they’re still on – difficult issues were resolved, and in my opinion, having been at this a very long time, there is a very positive feeling (as) both ministers are focused on stability in the region, on the importance of good relations between the two countries, and I’m hopeful that we can continue to work in a very positive way.”