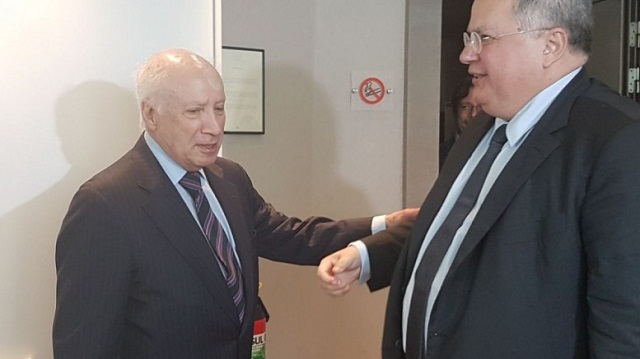 Foreign Minister Nikos Kotzias desceibed his meeting with United Nations mediator Matthew Nimetz on Tuesday as “productive”, saying he discussed a planned Greek draft agreement which will present proposals to resolve all open issues relating with the Former Yugoslav Republic of Macedonia (FYROM).

Nimetz is visiting Athens to discuss the ongoing talks between Greece and FYROM on the name dispute.

Speaking to journalists after a lunch with Nimetz, the minister said he presented his view on the positive elements of Nimetz’s proposal to resolve the dispute which could be adopted by Greece as well as the points that are unsatisfactory, proposing alternatives.

“I believe we have to work in that direction in good faith,” he said, adding that he leaves the rest “to those who want to criticize for no reason.”

Asked about when the next meeting with his FYROM counterpart Nikola Dimitrov will be held, he said after the proposal has been prepared. Kotzias said FYROM has been informed about the draft agreement but “we are working on its content” and explained that the draft will be Greece’s proposal “for dialog and to facilitate the negotiation.”

Regarding the timeframe for the talks, the minister said “the sooner the better”, adding that a lot of work is still needed. “It depends on whether the proposals we are making are reasonable or acceptable by the other side, or whether we will need to restart the whole debate in the agreement from the beginning,” he said.

Kotzias said the negotiations could continue even after the NATO’s summit in June: “If we cannot agree, we will continue,” he said.

The minister said in an interview broadcast by ERT public television late on Monday night he will present a draft agreement to Skopje that deals with all open issues relating to FYROM’s name and irredentism within February. The U.N. envoy is due to travel to Skopje on Wednesday for talks with FYROM’s government on the issue.