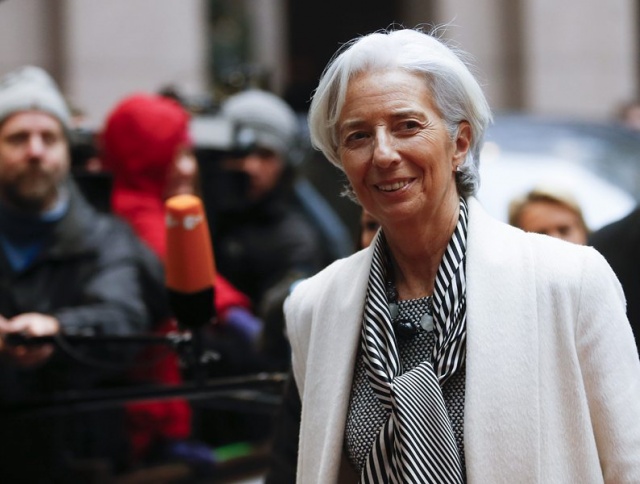 The managing director of the International Monetary Fund Christine Lagarde said on Thursday she will propose to the Fund’s board the approval of a standby arrangement for Greece, during a joint press conference with Eurogroup President Jeroen Dijsselbloem, ESM head Klaus Regling, EU Economic and Financial Affairs Commissioner Pierre Moscovici in Luxembourg.

“I would like to announce my intention to propose to the IMF’s Executive Board the approval in principle (AIP) of a new IMF stand-by arrangement for Greece. We have recently seen significant progress by the Greek government on policy reforms, with a staff-level agreement followed by supportive legislation from the Greek Parliament. We have also seen progress on debt relief, although further discussions are needed on the scope and type of measures to be provided by Greece’s European creditors,” she said in a statement after the meeting.

Lagarde said the AIP is a procedure which the IMF has relied upon in the past where there has been agreement on the policies that would underlie an IMF-supported program, but where full agreement between the member and its creditors has not yet been reached on new financing or debt relief. In the case of Greece, AIP would allow the IMF to be supportive of the progress made on policies, while release of resources under the IMF arrangement would be conditional upon Greece’s European creditors providing commitments for debt relief sufficient to secure debt sustainability.

“It is also important to note that AIP supports the IMF’s long-held principle that any new program with Greece should be predicated on the ‘two legs’ of policy reforms combined with debt relief,” she said.
With AIP, “the release of IMF funds would be contingent on policy implementation and receipt of debt relief assurances so that debt can be deemed sustainable. Furthermore, assessment of debt sustainability would be guided solely by the IMF’s own debt sustainability analysis,” she explained.

It is expected that AIP would involve a precautionary stand-by arrangement for a loan amount well below the IMF’s exceptional access threshold. The IMF’s Executive Board will need to determine the specific modalities of AIP.

“I strongly believe that use of the AIP procedure will enable the IMF to leverage both reform and debt relief. It will give confidence to creditors to disburse to Greece under the ESM program in July—thus reducing a potentially serious stress on the Greek economy—and it will give confidence to investors on the prospects for the Greek economy to grow and its people to prosper. I hope that the discussion over specific debt relief measures can soon be brought to conclusion,” she added.