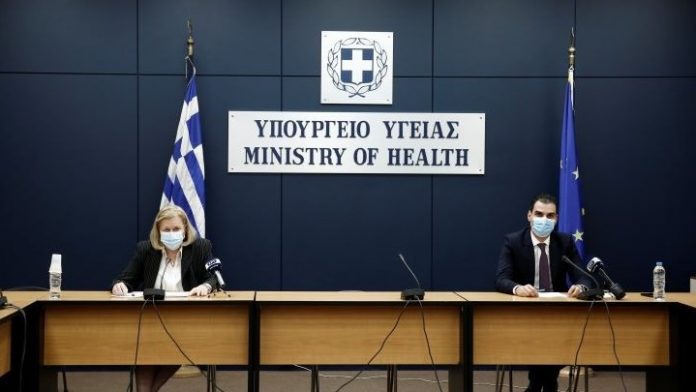 The launch of Greece’s coronavirus vaccination program on Sunday was a “day of celebration for Greece, for Europe, for preventive medicine and for public health”, said National Vaccination Committee Chair Maria Theodoridou at Monday’s live briefing on the national inoculation program, which has been named ‘Eleftheria’ (Freedom).

After mentioning having taken the vaccine herself, Theodoridou clarified that side effects are “extremely rare,” and she also pointed out that food allergies are not considered a factor against taking the vaccine.

Moreover, she noted that all vaccination centers across the country have taken all the necessary measures to be able to deal with any immediate side-effects, should there rarely be any.

Greece received 9,700 coronavirus vaccines on December 26, the same number of dosages as all the other EU countries, regardless of their population, said Health Ministry Secretary General for Primary Health Care, Marios Themistokleous, at Monday’s live briefing on the country’s vaccination program.

These were stored in a deep-freeze special facility in Athens, from where they were distributed to Attica’s five coronavirus reference public hospitals; on Monday, vaccines were also taken to four university public hospitals in the country: Thessaloniki, Larisa, Ioannina and Patras.

By 16:00 on Monday, 471 people had been vaccinated at Athens’ five coronavirus reference hospitals, said Themistokleous. A minor incident of a “non-serious allergic reaction did occur, but was dealt with immediately and successfully.”

Additionally, pending an imminent agreement between the European Medicines Agency and pharmaceuticals manufacturer Moderna on January 6, another 240,000 vaccines will be added on to the first quarter of 2021, he said.

Besides Pfizer, Moderna and AstraZeneka, another three companies are expected to deliver vaccines in 2021, he stressed.

The broader inoculation of the national health system’s health workers, including doctors and nursing staff, will begin en-masse on January 4, while the general population will start receiving the vaccine on January 20. The government’s online platform where citizens can book their vaccination appointments will open one week ahead of January 20; if an insured person has enrolled for paperless, electronic prescriptions, then a message will be automatically generated by the system for his/her appointment. Beyond this option, appointments can be booked via the emvolio.gov.gr platform, at pharmacies, and also at Citizen Services Centers (KEP).

Upon completed vaccination, after the second and final dosage, citizens can have the online system issue a personal certificate of inoculation for their own use, which will confirm the date and type of vaccine that they received.