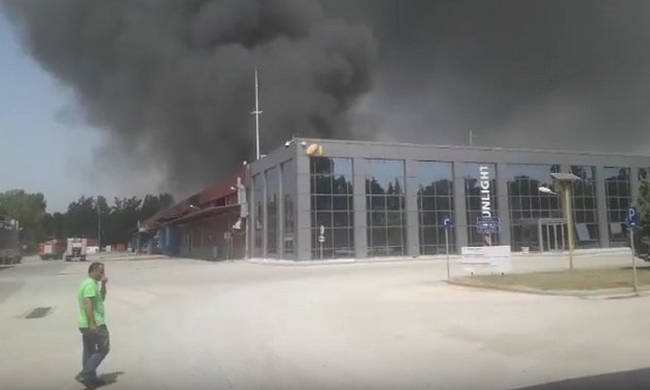 Fire-fighting forces throughout the Eastern Macedonia-Thrace region mobilised on Tuesday to put out a fire that broke out at a factory making batteries in Olvio, Xanthi. The fire-fighting effort was especially difficult due to the highly flammable materials stored in the central building, which caused minor explosions from time to time, as well as strong winds blowing in the area.

The sky turned black due to a plume of smoke rising from the fire, visible for several kilometres all around and filling the atmosphere with choking fumes. For this reason, authorities advised the area’s residents to evacuate their homes as a precaution. The evacuation order was for Olvio and nearby villages, including Agios Athanasios, Thalassia, Tympano and Toxotes.

According to a later announcement by the factory owner Sunlight Systems on Tuesday evening, the fire that started at its factory at 13:00 in the afternoon, for as yet unknown causes, was now under control.

“Fully adhering to the emergencies system and safety procedures, the authorities were informed and all the employees are absolute safe and in good health. The fire brigade is making every effort to put out the fire, which is already under control. It is worth clarifying that there is no danger of toxic gases in the area. The company’s management is in constant communication with the competent authorities,” the announcement said.