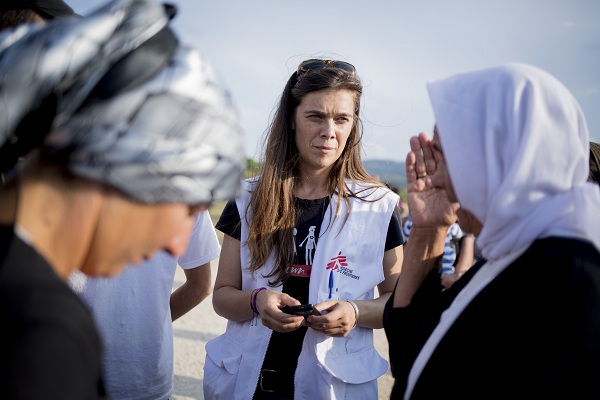 How is life in a refugee camp shaping the psyches of asylum seekers stranded in Greece? What does providing specialised psychological care to a population on the move entail? Why is mental health support to populations fleeing extreme violence and trauma so important inside the camps?

MSF is currently providing mental healthcare to asylum seekers stranded in Greece. How is life in a refugee camp shaping people’s psyches? What are the factors that can worsen their psychological wellbeing?

When you live in a camp under a tent or in a very old building where the conditions are bad, you start identifying yourself with these conditions. “I am a poor refugee, living in a tent, wearing the second-hand clothes given to me by a charity, eating food prepared by others, having lost my previous identity and now I am only a refugee. I cannot do anything but wait.” People can only put up with that for a short period. But if you spend months living like that, you start identifying yourself with it. You start to believe you have no value and you retreat into yourself.

The camps might now be open, but people are isolated. When you don’t have money, you do not speak the language, you are afraid of the perception that others may have of you – in the end, you prevent yourself from going outside the camp. Thus, a ghetto is created. Furthermore, people are left in the camp without any social organisation, any structure or rules. People are expected to organise themselves but this takes time. While all of that is going on, who is guaranteeing safety and order in the camp? Who can people refer to when a conflict arises?

In addition, people are becoming very tired. Imagine yourself living for months in a camping site in 35- or 40-degree heat without any trees to provide shade. Or imagine yourself staying in a humid tent, pelted by heavy rain for days. And we are talking about entire families, with old people, newborn babies and sick people. Living under these conditions can be very exhausting. The fatigue brings a lot of somatic and psychological issues. Usually, people think that the conditions are better in buildings but, when they are overcrowded, noise is a major problem. These building are not made to house so many people. All of these factors can worsen people’s psychological balance.

But the worst problem for the refugees stuck in Greece is that they are suspended in time and space. From a psychological point of view, they are stranded in a no man’s land. They cannot start a new life; they just have to wait and see what will happen to them. They do not know how long they will have to stay here or how long they will have to wait. They could be sent back. They may have to live in Greece or they may be sent to another country. The uncertainty about their future is terrible. It is devastating.

What does providing specialised psychological care to a population on the move entail, in practice? Can you describe MSF’s approach?

The majority of the people we see took the decision to flee their country and leave everything behind. In some cases, they even left family members behind. This is not an easy decision to make, especially for a parent. I’ve met parents who took the decision to cross the sea to save their children but at the same time they put their children’s lives at risk. Very often, we see people suffering from guilt because they exposed their own children to potential death or because they think they took the wrong decision and now their family is stuck in Greece without a future. This can be the topic of our psychotherapy sessions. People need to start describing their feelings to be able to live with their guilt.

Psychologists providing care in refugee camps do not always speak the language of the people. Is it difficult to work with interpreters?

Working with interpreters is not always a barrier. Sometimes it is a very useful tool.

It is important in the therapeutic process to show people that even if you lack the language skills, you can overcome the handicap by asking for help from someone else and you can achieve your goal thanks to that cooperation.

There is another added value, too. Usually, people not used to psychotherapy get a bit anxious when faced with moments of silence; they feel embarrassed. When a translator is used, the patient has the time to think about what he/she has said and what he/she has been told. At the same time, the specialist is able to observe the patient’s reactions and watch their body language. So the presence of a translator can support the whole process.

How easy is it for the people you work with to overcome their traumatic past and live a normal life again?

I think that humans are capable of doing incredible things. They might go through really terrible situations, but they can recover. These people can live normal lives again. They just need a place where they are given the chance to build their lives. Most of them will overcome their problems on their own. A few of them will need special support – a space where their psychological suffering can be recognised and where they can be helped to integrate what happened to them in the past. If we leave them without care, they will live a life that is destroyed by the cause of their suffering. We cannot allow all this violence to continue contaminating their minds. We need to provide them with care.

At the beginning of my mission in Greece, I met a Yazidi woman from Sinjar/Sengal in Iraq.[1] When she spoke, she stared at the floor. She told me that two weeks before she had tried to commit suicide because she couldn’t imagine a way out anymore. For two years, she kept having flashbacks from the genocide she witnessed before her eyes. She could not ‘delete’ these images. She didn’t know how to live on her own anymore. She couldn’t take care of her children and couldn’t take part in a conversation. She felt so alone in the world. This woman told me that she felt like she was alone in a sea of sadness.

Medically, she suffered from insomnia. She had not slept a full night in two years. She used to stare at the floor during our first sessions. Now, she has started looking at me. I told her that it is possible to live another life and that no one is condemned to live with all of this suffering. She looked at me in the eyes and asked me, “Do you really think it is possible?” I told her I cannot guarantee anything but that I know she doesn’t have to live with these images in her head.

This type of psychological disorder is a classic post-traumatic stress-disorder (PTSD). PTSD , depression and anxiety disorders are the main symptoms we see in the camp and require specialised care.

Thankfully, today, this same woman is much better and is able to deal with her experiences. Patients like these make me realise how important MSF’s role is inside the refugee camps.