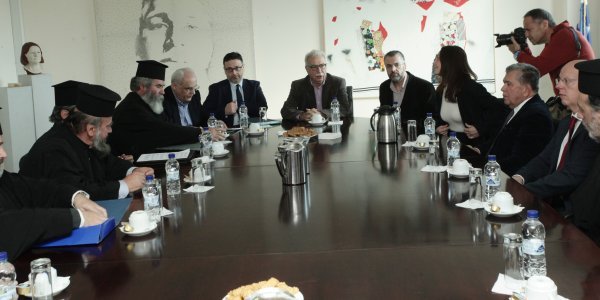 A meeting between the Holy Synod of the Church of Greece and Education Minister Costas Gavroglou was held at the education ministry on Tuesday, as part of an ongoing dialogue on how to implement an agreement regulating relations between the Church and State.

The meeting discussed the education ministry’s proposal for implementing the agreement, announced by Prime Minister Alexis Tsipras and Archbishop of Athens and All Greece Ieronymos on November 6, which was presented to the senior clerics.

Church-State dialogue will continue next week, at a new meeting that will be held at the Petraki Monastery, which serves as the headquarters of the Holy Synod of the Church of Greece.

According to an education ministry press release, the plan presented to the clerics seeks to assuage any concerns raised after the prime minister and Archbishop Ieronymos announced their agreement and to outline the reasons why it benefits both sides.

Especially with respect to the wages of the clergy, the ministry noted that their pay and rights of tenure are unaffected but their legal position and other rights will be better protected, since they will be set down in law and cannot be changed without the agreement of both sides.