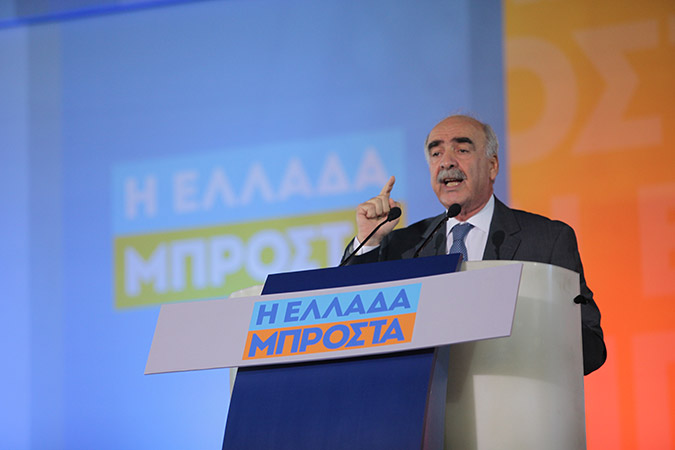 In his final pre-election speech in Omonia Square, central Athens, on Thursday night, New Democracy leader Evangelos Meimarakis appealed to Greeks to back ND and put an end to “SYRIZA’s dangerous experiment.”

Describing SYRIZA leader Alexis Tsipras as a “peddler of promises,” Meimarakis said that Greece needs someone “who will govern, not try to escape.”

“New Democracy has shown that it has the ability to govern, compared to the seven-month governing incompetence of SYRIZA,” he said. He added that “there are no easy roads.” “We have difficult months ahead of us but we are determined to work hard and enforce structural reforms that are demanded.”

Meimarakis, who is perceived as the key factor for ND’s recent increase in popularity, encouraged all ND supporters to cast their vote on Sunday, noting that the race will be close and “no vote can be lost.”

As for potential alliances after the elections, Meimarakis repeated that ND is open to alliances, saying, “We will cooperate with those who want to; those who don’t can go their own way.”

ND’s campaign camp has focused chiefly on four areas: deconstructing SYRIZA’s arguments and claims of its achievements while in government; seeking to annul the moral advantage SYRIZA has claimed, chiefly by pointing to the case of a close aide of Tsipras who has been accused of conflict of interest; increasing the pressure on centrist voters to back Meimarakis at the risk of facing another Tsipras administration; and boosting support in regions including Attica, the country’s agricultural belts and Crete where SYRIZA made gains in January’s elections.

Tsipras is due to speak at Syntagma Square on Friday night as he makes his final bid to rally the party’s support. Only around 60 percent of Greeks who voted for SYRIZA in January are saying that they will back the leftists again, according to opinion polls. If SYRIZA is able to raise this proportion by a few percentage points then it could prove the difference in winning Sunday’s elections or coming second.

Several European leftist leaders, including Pablo Iglesias of Spain’s Podemos and Gregor Gysi from Germany’s Die Linke are expected to be at the rally to show their support for Tsipras.