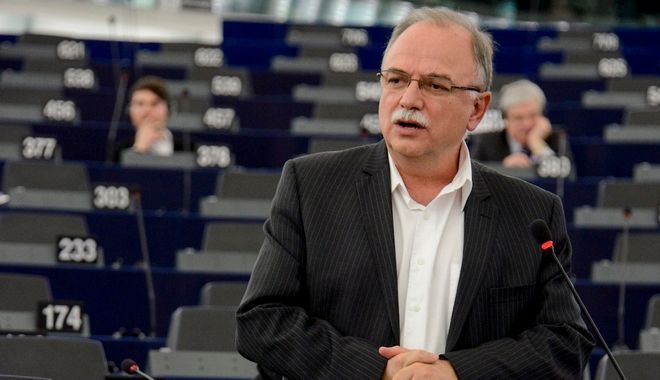 In response to an open letter calling for urgent measures to relieve Greece’s debt, sent to European Commissioner for Economic and Monetary Affairs Pierre Moscovici by 36 European Parliament deputies, Greek MEP Dimitris Papadimoulis on Thursday commented that the Eurogroup’s decisions for debt relief must be implemented without delay.

“The open letter to Mr. Moscovici, an initiative of the Progressive Caucus, has met with widespread resonance, not just within the European Parliament but over a broad political and social spectrum. Other, similar initiatives will follow,” he said.

Papadimoulis, who was among the MEPs signing the letter, noted that “relief of Greek debt and implementation of the Eurogroup’s decisions without delay…is the key not only for turning the Greek economy toward sustainable growth rates but also to a comprehensive handling of public debt as one of the major European issues.”

The letter backed by socialist, green and leftist MPs called on the European Commission to secure debt relief terms for struggling Greece by the end of the year.

“Greece urgently needs to leave behind the vicious circle of recession and deflation, and move forward with policies that enable both public and private investments and creation of high quality jobs,” the MEPs wrote, adding that “Any further delays regarding the beginning of a concrete and conclusive dialogue on debt relief could have devastating results on the Greek economy.”

“Debt relief is an important step of the effort to put an end to Greek crisis. Debt relief discussions, as part of the agreement, have to be opened as soon as possible, concluding by the end of the year with a clear road map for debt relief for Greece,” the MEPs said.

Reacting to the letter in an interview with AFP, Moscovici noted that the MEPs “have knocked on my door, so much the better.” The European Commission would play its role as “honest intermediary,” he said, expressing confidence that it was possible to reach an overall agreement on reforms and on public debt relief for Greece by the end of the year. Unlike the IMF and the European states, the European Commission was not a “creditor” of Greece, he pointed out.