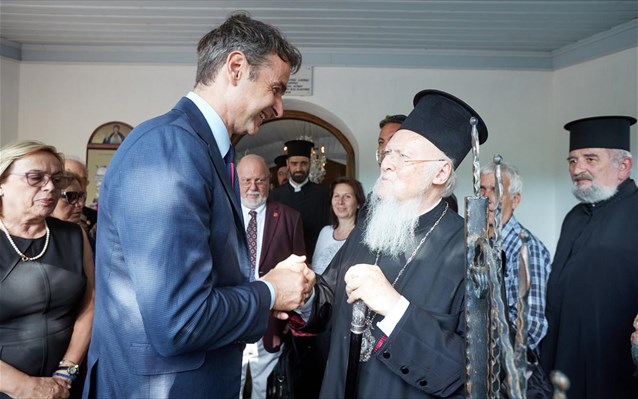 New Democracy leader Kyriakos Mitsotakis attended the inauguration of a chapel dedicated to Saints Constantine and Helen by Ecumenical Patriarch Bartholomew on the island of Imvros (Gokceada) on Tuesday afternoon.

Mitsotakis arrived at the island on Monday afternoon and was welcomed by members of the Greek community and the Educational and Cultural Association of Imvros. He then paid a visit to the village of Agii Theodori and the Greek primary school where a bust of the Ecumenical Patriarch Bartholomew, a graduate of the school, was unveiled. The patriarch held a dinner in his honor at his brother’s house.

On Tuesday morning, the main opposition leader met with the prefect of the island, Muhittin Gurel, and with mayor Unal Cetin at the island’s capital, Panagia. He then visited the headquarters of the association, which is responsible for the Greek schools that reopened in recent years.

Mitsotakis also visited Agridia, where the high school is, and lunched at the local Greek restaurant.

Following the dedication of the chapel, Mitsotakis expressed his pleasure at being able to attend the ceremony led by Ecumenical Patriarch Bartholomew, and added, “The history of Imvros is interwoven with the common fate of Greeks and Turks. Visiting the schools of Imvros today, I had the great joy of discovering that the Greek community on Imvros is growing and that the island remains an example of peaceful coexistence between our two peoples. This peaceful coexistence should act as a guide to Greek-Turkish relations in the future and is beneficial, as long as international laws and rules of good neighborliness are observed.”

Mitsotakis left the island later in the evening.